Part Two As mobile sales and connections continued to soar and break records, just how much your phone knows about you and who can see that information were big subjects in 2011.

The long-smouldering issue in the UK of newspaper journos paying private investigators to break into mobile voicemail inboxes in search of scoops finally exploded.

The idea of PIs working for News International hacking into voicemails of people in the public eye had already been investigated. In 2011, however, it was the story that the News of the World had hacked into the voicemail of a murdered schoolgirl, Milly Dowler, that caused a storm. Other claims followed: that the voicemails of relatives of deceased British soldiers, and victims of the 7/7 London bomb attacks, had also been heard. Suddenly it was no longer the rich and famous who were victims. Now it was ordinary people. 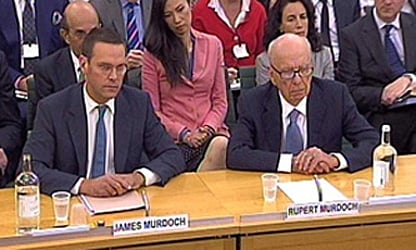 The Murdochs appeared before a Parliamentary committee

PM David Cameron launched an inquiry headed by Lord Justice Leveson into phone hacking and the subject of police bribery by the media - a televised affair that has seen and heard from alleged hacking victims who came forward to tell their stories. Cameron's director of communications Andy Coulson, who had also served as a NotW editor, was also forced to resign and was arrested. He's now suing NotW's publisher, News International.

With advertisers abandoning the aforementioned Sunday tabloid and the political climate turning hostile, News International chief Rupert Murdoch switched to damage-limitation mode. He closed the NotW on 10 July after 168 years, and after standing by former NotW editor Rebekah Brooks, Murdoch he later accepted her resignation as NI chief executive. It wasn't enough.

Rupert and son James, head of his dad's UK business and therefore in charge of the NotW, were summoned before a Parliamentary committee on media affairs to give evidence on the hacking claims. There, both men denied they had any knowledge of the practice of phone hacking inside NotW, a remarkable claim given James had signed off hundreds of thousands of pounds in settlements related to hacking and given Rupert's famously fastidious involvement in the paper's running. When a News International lawyer challenged James' account, Murdoch junior was called back to Parliament for a heated showdown with committee members, but he stood by his claims of knowing nothing.

The fallout hit Rupert's business plans, too, as he binned his plot to buy the remainder of satellite broadcaster BSkyB.

The relationship of Murdoch and News International to power was also laid bare: a former senior investigator for the independent Information Commissioner – who'd followed up on possible breaches of the Data Protection Act and who came across 17,000 requests for confidential information from journalists in notebooks owned by a private investigator – told Leveson he was told to lay off because the press was "too big" to take on.

Ironically, Scotland Yard officers later reported, in December, that the voicemails deleted on Dowler's phone – the catalyst for the entire firestorm – were found to have been deleted not by intrusive NotW journos, but by the voicemail system

Ironically, Scotland Yard officers later reported, in December, that the voicemails deleted on Dowler's phone – the catalyst for the entire firestorm – were found to have been deleted not by intrusive NotW journos, but by the voicemail system itself, which automatically canned messages after a period of 72 hours.

Voicemails weren't the only weak point on smartphone privacy; the subject of your phone spying on you also became a hot topic.

An Android app developer published what he said was conclusive proof that 141 million smartphones were secretly monitoring the key presses, geographic locations, and received messages of users with a piece of software from Silicon Valley company Carrier IQ.

Next page: Who's that inside my phone?
Page: