The little engine that could rescues $2bn military bird

The US Air Force Space Command's 14-month effort to save a $2bn military communications satellite overcame failed thrusters, threatened explosion, space debris, and destructive radiation, thanks in great measure to tiny thrusters with a mere 0.05 pounds of oomph.

It wasn't easy, as airforce-magazine.com reports in a blow-by-blow account of the rescue published in its January issue, which details for the first time exactly how close the mission came to costly catastrophe.

Space Vehicle-1 was launched on August 10, 2010, with the goal of placing the first satellite of the planned Advanced Extremely High Frequency (AEHF) system into orbit.

The AEHF system, described as having a primary mission of "near-worldwide, secure, survivable satellite communications" among military and civilian leaders and worldwide forces, is a 10X improvement over the current Milstar communications system, the first satellite of which was launched in 1994.

The first AEHF satellite, launched in 2010, was intended to orbit at 22,236 miles above the earth (give or take a hop, step, and a jump), the distance at which a satellite becomes geosynchronous – meaning that one orbit takes exactly as long as one earth day. 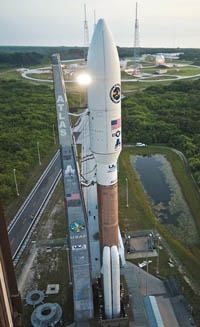 Traveling along above the equator – directly overhead the Galápagos Islands, to be exact – the satellite was intended to also be geostationary, meaning that its orbit would keep it above the same spot on earth, rather than wagging back and forth across the equator, which would have been the case had its orbit been at an angle to that mid-earth dividing line.

The launch of the Atlas V carrying SV-1 with its AEHF payload went off without a hitch, placing the 13,420-pound vehicle in its planned highly elliptical orbit, with an apogee of 31,000 miles and a perigee of 143 miles.

It wasn't intended to stay in that unstable orbit for long. The SV-1's propulsion system was scheduled to reduce its apogee and expand its perigee until it reached its eventual geosynchronous, geostationary parking place.

Problems, though, cropped up almost immediately. On August 15, the first firing of the vehicle's main propulsion system, the hydrazine-fueled liquid apogee engine (LAE), failed – the LAE shut down after only a few seconds. The space boffins gave it another go on August 17, with the same result. The LAE also also sent back telemetry that seemed to indicate that it was overheating.

According to airforce-magazine.com, the command lead of the Military Satellite Communications Systems Directorate (MILSATCOM) at the Air Force Space Command (AFSPC), Michael Lakos, thought the second shutdown was "an Apollo 13 moment," since the vehicle needed the LAE to achieve its orbital goal. Over at the Space and Missile Systems Center (SMC) in Los Angeles, the head of MILSATCOM, David Madden, thought the mission was lost.

Madden then assembled a brain trust to determine what had gone wrong with the LAE – and fast. They quickly determined that a fuel-line blockage had cripped the engine. More importantly, they advised the vehicle's masters that to try to fire it up again could cause an explosion.

"They probably saved the satellite," Madden told airforce-magazine.com. "We could have had combustion outside of the engine, which could have either totally damaged our payload or caused catastrophic damage to the vehicle."

De-crewed? More like de-orbit if the ISS had to wait for Orion

Is it worth competing with SpaceX prices?