Rugged case manufacturer G-Form sought to prove its hardware protection credentials this week, launching an iPad into space before letting it plummet to Earth. Needless to say, the fondleslab survived the fall - we probably wouldn't write the story otherwise.

The company wrapped an iPad in its Extreme Edge case and, using a weather balloon which bursts at altitude, sent it soaring toward the stratosphere.

The slate made it above 100,000 feet before it started to rapidly descend, eventually crash-landing on a rocky hill in the Nevada countryside. 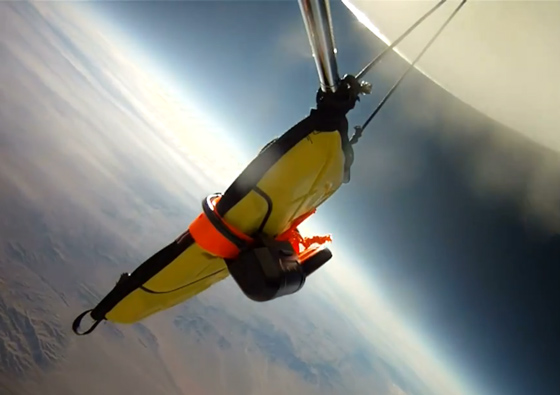 “As far as we know, this is the first iPad ever in space,” said G-Form’s VP of innovations, Thom Cafaro. “And definitely it’s the first iPad that’s ever free-fallen from space and survived to play more movies."

Yep, the iPad still worked, so while this is an obvious attempt to grab promotion on the company's behalf, we probably shouldn't question the pedigree of its cases too much, which will be on show at CES 2012 next week. Here's the video of the iPad's galactic journey:

Last year, a US Air Force Combat Controller accidentally dropped his iPhone out his pocket while leaning out of an airplane. It survived a fall of 1000-odd feet. Perhaps Apple hardware is just that brawny.

Our very own team at Vulture Central are experienced in the art of launching things to great heights too, after El Reg became the first to send a paper aircraft into space. That escapade was recently turned into a motion picture - well, sort of - that you can view without the need to hit up Torrent sites. Check it out. ®