CES 2012 Victorinox is making a Swiss Army penknife with a 1TB USB stick inside it, claiming it's the world's highest USB stick capacity.

It's being shown at CES 2012 in Las Vegas. You can either buy the stick on its own – the airline-friendly version swings out from a standard-looking Swiss Army penknife container, coloured red or black – or you can get one with a pair of scissors and a knife... but don't expect to get that through airport security.

It has been running the product line for some years; there was a 1GB version in 2008, meaning a 1,000X capacity improvement in four years. 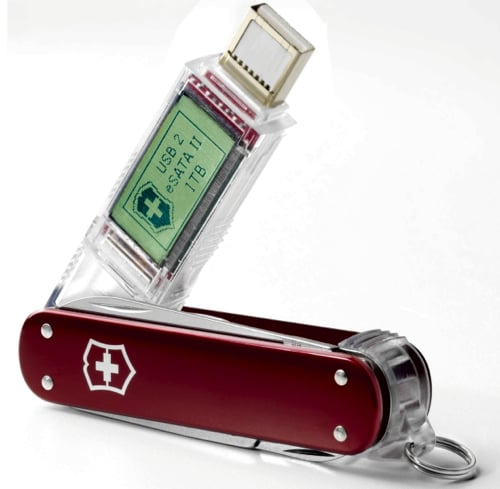 It can be accessed via USB 2.0 and 3.0 or eSATA, and has a 48 x 96 dot monochrome LCD display showing enough text for a device label or some indicator of the drive's contents. It also has AES 256-bit encryption.

On a separate note, just how small can a PC be these days? You could probably get an acceptable CPU, support chips, DRAM and SSD on a motherboard the size of a matchbox. With a keyboard and screen a basic design decision would be whether to stick the little sucker inside the keyboard or the screen enclosure.

Could you get rid of the mechanical keyboard without compromising the screen display area? You could have a clamshell tablet with two screens. One would display a soft keyboard and the other be the main display screen with, say, half the keyboard screen available as well.

Attack of the cryptidiots: One wants Bitcoin-flush hard drive he threw out in 2013 back, the other lost USB stick password

A combined total of $575m deleted... and counting