Tighter Google+ and Picasa integration ahead

Mountain View is rolling out much tighter integration of its Google+ network into search results with what it calls “Search plus your World.”

In practice, this means an extension of the Google+ integration that started in August, with a new button in the top right of the page that adds data from the user’s social network that could be relevant to a search as well as any Picassa images. This will be rolled out to signed-in Google and Google+ users (using English) over the next few days, and presumably to the rest of the world if all goes well.

In addition, the autocomplete function will now add in Google+ names from people on your network as you type in a query, along with a brief summary of their information. There’s also a new box to display other “prominent people” on Google+ who you can “strike up meaningful conversations” with. Given the three examples given are Britney Spears, Alicia Keyes, and Snoop Dog, this may be unlikely. 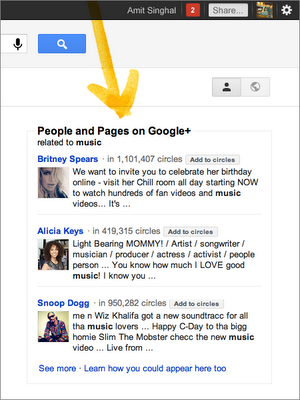 Care for a "meaningful conversation?"

“You should also be able to find your own stuff on the web, the people you know and things they’ve shared with you, as well as the people you don’t know but might want to. . . all from one search box. We’re transforming Google into a search engine that understands not only content, but also people and relationships,” gushed Google Fellow Amit Singhal in a corporate blog post.

On the privacy front, the company assures users that security is its number one concern. Only public data will be shared, under SSL, and users can turn off the feature per session or by default. Settings will also allow for location and language controls.

Nothing was said in the announcement about integrating other, some would say dominant, social networking sites into these results. So “Search plus your World” will remain centered around Mountain View for the time being.

This will certainly drive traffic to Google+, but may cause Google even more problems with the antitrust hearings in Congress. Senators Kohl and Lee will certainly not approve and the forthcoming European Commission report may need some extended editing. ®