El Reg's robot lawnmower gets a name, and a sidekick

Following lengthy deliberations, our expert panel has agreed that our advanced robotic lawnmower shall henceforth be known as the Genuinely Autonomous Garden Assistant – or GAGA – and it gets a sidekick too.

That sidekick takes the form of a blade-testing runabout to which we can fit a variety of blades in order to show us how the different cutters perform ... and how life-threatening the final design will need to be. It will also give us a chance to test grass collection, though we're still debating the necessity of that step.

Among the various bits of technical input we received were some very decent suggestions for names, and some we couldn't possibly repeat in a family publication like The Register.

We were very tempted by "Kusanagi", which was suggested by Flocke Kroes. But naming our robot after a legendary, and mythical, Japanese sword is a little pretentious, even if that sword did become known as "grass cutter" after clearing a grassy meadow to enable our hero to escape from an encroaching fire.

But while GAGA is still on the drawing board, our blade-testing rig is completed and ready to help us establish what kind of cutter is going to get the finish we need, and how dangerous the final design is going to have to be. 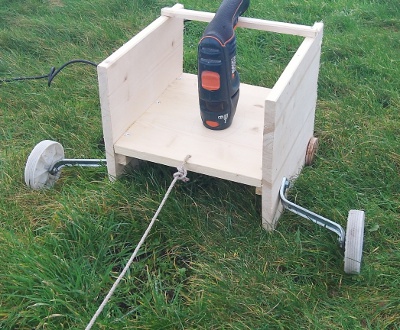 Set it going and pull the rope: what could possibly go wrong?

Existing robot lawnmowers use metal blades, often in pairs or triplets, which mulch the grass as they cut. Mulching blades, we've come to understand, have a flick to the back which throws the cut grass up into the air so the next sweep of the blade slices through it a second time, at least, so the grass is reduced to fragment and thus quickly rots back into the soil.

The way in which existing robots go back and forth over the same patch of ground also helps the mulching process, though as we've no intention of allowing GAGA to be so inefficient we'll need to establish if that's important to get fragments small enough, or if a single pass will do it.

To that end our testing trolley has been equipped with a clamp to hold an electric drill, to which a variety of blades can be attached at an adjustable distance from the ground. Under body lighting is provided, so we can get video evidence of the cutting process, and while we're waiting for the appropriate video equipment to arrive (something we can mount beside a sinning blade with alacrity) we're drawing up a list of blades to be tested.

We'll be starting with the less-dangerous options, such as strimmer wire (the plastic kind) as well as some of those plastic blades they put on the new strimmers. Those will leave a nasty weal on the skin, but are unlikely to kill anyone, unlike the metal disk cutter we'll also be testing. We'll also attach a proper mulching blade, taking note of how long the grass fragments are once they've been cut, and cut again.

That covers most of the suggestions received so far, with the notable exception of a cylindrical blade, and the ever-popular laser. We will be trying a laser or two, as so many of you suggested it, but we're not optimistic. We did have hopes for a cylindrical blade, but everything we've seen convinces us that we're not going to be able to generate enough torque to keep it running.

One other blade type we'll be testing is the scissor blade, as used by hedge trimmers and the like. That won't fit into our testing rig, so we'll have to recruit a human or two at that point in the test.

The plan is to have the testing done in the next few days, but there's still time to add any blades we might have missed, or additional testing which could be combined, don't hesitate to let us know. ®