Pic Astronomers have photographed the faint embers of a star explosion that happened 9 billion years ago.

The pic, snapped by the Hubble Telescope and published this month, is particularly significant because it helps boffins measure the rate at which the universe is expanding. This gives them a handle on understanding the mysterious dark energy that they posit is propelling matter outwards as a repulsive force.

The feeble glow of the star's death throes occurred when the universe was only third of its current age of 13.75 billion years. Astronomers calculated the distance from the star and then spent eight months analysing the light the space telescope received from the supernova.

In particular they were measuring the extent to which the light had shifted to the red end of the spectrum, allowing the clever clogs to estimate how fast the light source was moving away from their observation point, the Hubble. 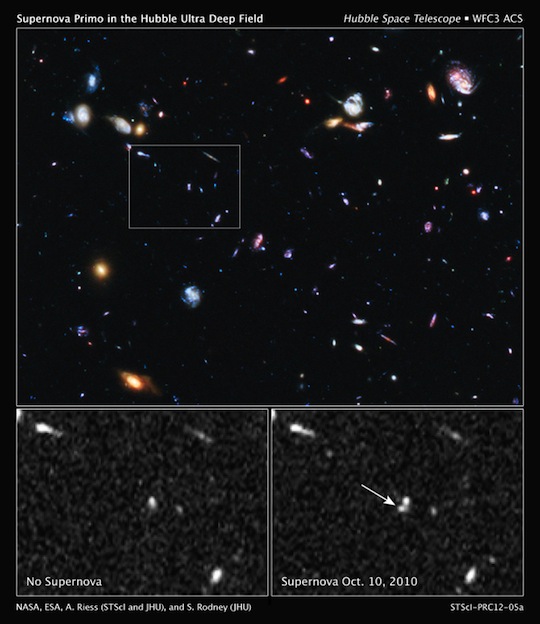 NASA's Hubble Space Telescope snaps the distant supernova. The top photo shows part of the Hubble Ultra Deep Field, the region where astronomers were looking for a supernova blast. The white box shows where the supernova is later seen. The bottom left image is a close-up of the field without the supernova. A new bright object, identified as the supernova, appears in the image at bottom right

The scientists nicknamed the explosion SN Primo. The type of blast that marked the destruction of the star is known as a Type Ia supernova, which is likely caused when white dwarf stars - the burned-out cores of normal stars - siphon too much material from their companion stars and explode.

The results were presented to the American Astronomical Society meeting in Austin, Texas on 11 January by the Hubble research team - a crew led by Adam Riess from the Space Telescope Science Institute and The John Hopkins University. Riess and two other investigators won a Nobel Prize last year for discovering dark energy 13 years ago using the Type la supernova to plot the universe's expansion rate. The supernova was first spotted by the Hubble in October 2010. ®