Legendary New York band The Velvet Underground has filed a lawsuit against the Andy Warhol Foundation, after the deceased artist's company agreed to a licensing deal with a case- and sleeve-maker for Apple products.

The pop group, fronted by Lou Reed, has accused the foundation of infringing the trademark for the famous banana design adorning the cover of The Velvet Underground's debut album from 1967.

Reed and his band cohort John Cale alleged in the suit filed yesterday in a federal court in Manhattan, New York, that the foundation infringed the banana design trademark by licensing its usage to third parties, according to Bloomberg.

The band worked closely with Warhol in the '60s and the infamous king of pop art designed the banana illustration for the group's first album entitled The Velvet Underground and Nico.

Warhol, who died in 1987, asked in his will for a foundation to be established in his name that would help to advance visual arts.

In April last year, Incase – which makes sleeves, bags and cases for Apple products including the iPad and the iPhone – announced it had collaborated with the Andy Warhol Foundation to create a "distinctive collection" of products that carried the artist's work. 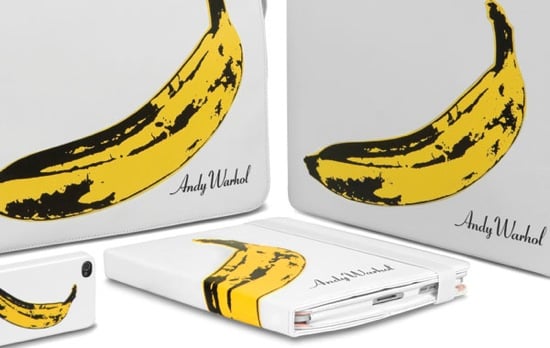 Peel slowly and see that... this image is in the public domain, argues Lou Reed's crew

Among those designs was The Velvet Underground's album cover.

“Incase has created an exciting collection that taps in to the creative, non-conformist spirit of Andy Warhol and embodies his sophisticated sense of design,” said the Andy Warhol Foundation's director of licensing Michael Hermann at the time.

“Incase for Andy Warhol is a fitting tribute to the artist who continues to inspire us to think differently.”

In its complaint, which does not cite Apple in the civil case, The Velvet Underground claimed that the design could not be copyrighted because Warhol took the banana image from an advertisement that was in the public domain.

When the illustration appeared on the group's album cover, no copyright was present and nor did anyone subsequently seek to claim any trademark over the artwork, the lawsuit said.

“The banana design is a significant element of Velvet Underground’s ongoing licensed merchandising activity,” said the band in the complaint.

Intriguingly, the group added that their use of the design had "been exclusive, continuous and uninterrupted for more than 25 years".

The filing said that Warhol's copyrighted works have a current market value of $120m, while the foundation has pulled in $2.5m a year from licensing rights to the artist's work.

The Velvet Underground wants a judge to bar the use of merchandise such as that created by Incase from being sold. The band also wants monetary damages to be awarded, a judicial declaration that the foundation holds no copyright to the banana design and a trial by jury.

The Register asked the Andy Warhol Foundation for a response to the lawsuit, but it was not available for comment at time of writing.

In recent years, Reed has declined to perform some of the songs from his band's first album. Heroin is a good case in point. The singer told legendary music journalist Lester Bangs that he was "disturbed" by some of the band's fans taking the song a little too literally.

Apple's T2 custom secure boot chip is not only insecure, it cannot be fixed without replacing the silicon

Which means your new Mac is vulnerable to 'evil maid' attacks, if that's something you worry about

Don't worry, you can still microwave your dinner – even if this smells of ransomware