The year's best products... and the worst

More than 28,500 votes were cast by Reg readers during December 2011 when we asked you all to name the best - and the worst - tech products of the year.

We asked for your thoughts on hardware and software in the Lifestyle, Mobile, Computing and Gaming categories, and we also wanted you to name and shame the products that you felt most warranted being awarded the unwished for Rusty Dodo Award. 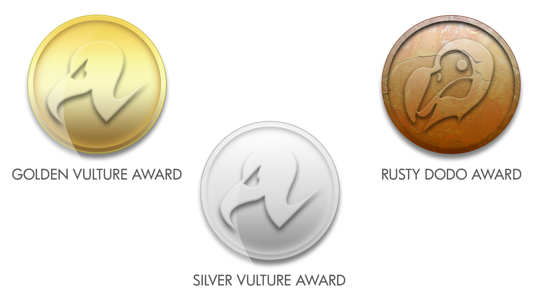 In addition to a shortlist of potential award winners which reflected our choices, we also gave you the chance to make your own suggestions.

It was an interesting experiment, naming some worthy products we hadn't considered, highlighting some illogical dislikes and implausible favourites, and some downright dim entries.

No, Ted, you are not going to be chosen as Smartphone of the Year.

As another example, the Mobile category saw Nokia's Lumia 800 smartphone gaining positive votes to a degree far in excess of its share of the market. Ditto its operating system, Windows Phone 7, in the Smartphone OS of the Year award.

And, indeed, the various votes for Meego.

Then there was the twit who felt he needed to tell us: "Dunno much about cameras."

Best Content Service Provider? "None of them - they're all sharks," one wit responded.

Other suggestions were more sensible. The call for Lifestyle Rusty Dodos included: "Youview - for being so late it is DOA if it ever arrives."

Then there was the : "Anything by Linksys - relaunching the same product for the last few years."

And we can't ignore the "anything muppet related".

Here are some of our favourites:

"Apple iPhone all models and all Android Smartphones because they don't give a shit about privacy," suggested one tinfoil hat wearer.

"iPhone 4S, iPhone 4 was great, but iPhone 4S had a potential to be better and not disappoint so many people."

"Ubuntu 11.04 for the worst UI ever, utterly appalling at finding and keeping what you want where you want. Not just a steep learning curve but it is easier to learn mandarin than understand the logic of some of the changes."

"Any budget Tablet. They're awful. The lot of them."

"Any smartphone too big to fit in a pocket."

"The MS ad where the kid creates a crappy PowerPoint for his dad."

And now, the winners…

Sure, go ahead and load APKs instead of using an app store. You won't enjoy the results
Research9 Dec 2022 |

Warplane project may include AI in the cockpit, and comes as tensions rise with China and Russia
Security9 Dec 2022 | 17

Opinion Don't sob into your battered copy of K&R though, the shift will move slowly
OSes9 Dec 2022 | 16