Technically, a Silicon Graphics Altix UV 1000 could play Crysis, but in the case of the machine being installed at Sikorsky Aircraft, its game is more realistic: an advanced helicopter flight simulator to create things that really do blow stuff up.

The Altix UV 1000 is, of course, the big gun in the SGI arsenal, able to support up to 256 sockets of Intel's eight-core Xeon 7500 or ten-core Xeon E7 processors in a single, global shared memory system spanning up to 16TB of main memory. While the system is made from blade servers, the NUMAlink 5 interconnect allows those blades to share a coherent, global memory space that is, for many intents and purposes, equivalent to SMP or NUMA clustering on much smaller machines.

Sikorsky, which is a division of military contractor conglomerate United Technologies, will be installing the Altix UV 1000 supercomputer in its Bridgeport, Connecticut data center, where it will run computer-aided design, analysis, and simulation of current and future Sikorsky copters and planes.

Specifically, the super will be used on the S-97 Raider, the first instantiation of Sikorsky's X2 design that has dual-rotors and a rear prop to allow the copter to have an airspeed that approaches 300 miles per hour – about twice the speed of a decent copter without the pusher.

The super will also be used to support the CH-53K, S-76D, H-60, and S-92 helicopters, as well as other "special programs," whatever that might mean. Sikorsky is self-funding the S-97 copter, by the way, after three years of testing out the X2 design concepts. The company hopes to have Raiders in production in 2014 to show off to the military, government, and other corporate customers.

Given its speed, you'd want your medevac to be in one of these babies. 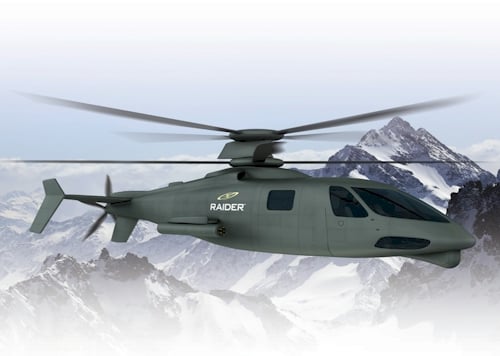 Sikorsky's S-97 Raider helicopter – dream on, you can't have one

The machine – meaning the computer, not the copter – is built with six blade enclosures spread across three server racks, with a total of 576 Xeon cores and 1.5TB of main memory shared across those nodes. It will have some internal storage and will plug into the InfiniteStorage 220 disk arrays that Sikorsky already has on site.

Sikorsky is a long-time user of SGI iron. Back in the 1990s, the helicopter maker had two Power Challenge 10000s, based on its MIPS R10000 processors and its Irix variant of Unix. By 2000, Sikorsky was running Origin 2000 clusters, and in 2005 it upgraded to a mix of an Altix 3700 Itanium blades with 512GB of shared memory and some Altix 350 systems for developers to simulate all of the various copters is was working on to simulate them in various environments. The company used a cluster of Altix XE machines (without global shared memory) on the CH-53K Super Stallion heavy-lift cargo and personnel copter being developed for the US Marine Corps. And the latest big box Sikorsky had from SGI was a 192-core Altix 4700 machine with 600GB of shared memory. The new machine sports three times the cores and three times the memory, allowing for higher-fidelity simulations.

Ditto for the UK Computational Cosmology Consortium, the affiliate of Cambridge University where theoretical physicist Stephen Hawking gets his paycheck, which committed to the Altix UV 1000 back in August 2010 after starting out on Origin gear when it was founded in 1997.

That August deal was for the COSMOS facility to get an Altix UV 1000 machine with just under 1,000 cores and 2TB of shared memory. At the time, El Reg said this was a pretty puny machine for a man of Hawking's stature, and apparently funding was made available for a substantial upgrade.

Now, COSMOS has inked a deal with SGI for a future Altix UV 1000 with 1,856 cores and 14.8TB of memory. More importantly, the machine will have 32 of Intel's Many Integrated Core (MIC) coprocessors, which offer better bang for the watt than the Xeon chips for certain kinds of scientific calculations. The future COSMOS system will use an as-yet unannounced NUMAlink 6 interconnect. This will be the ninth upgrade the facility has done with the many incarnations of SGI.

The big news is that SGI has managed to retain Sikorsky and COSMOS even as it has put them through two processor architecture jumps and an operating system jump. ®