'Don't care if you inspect farmers - STOP WHAT YOU'RE DOING'

Angry copyfighters barraged a small Scottish food certification agency with abuse last week - in the belief they were protesting against hated US anti-piracy legislation.

The Scottish Organic Producers Association - whose website is at sopa.org.uk - was perplexed when it found itself on the receiving of dozens of nasty and illiterate emails.

Remarkably, nothing about the site's design - including pictures of sheep, vegetables, Angus cattle and fruit - did anything to suggest to the furious freetards that they'd got the wrong SOPA - or that something might be not quite right. 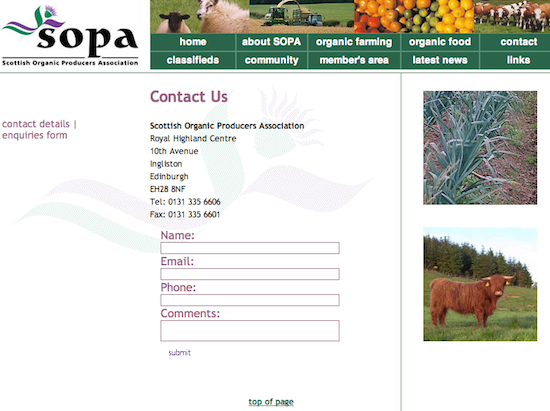 Not the entertainment industry. Or is it?

Dozens of emails were submitted via a form on the the association's website. Techie Gavin McMenemy told El Reg that the nastygrams had subsided by the end of last week. Here are a couple of examples received by the agency, which certifies organic farmers in Scotland.

One from 'Josh Chard' pleaded:

Stop what you are doing. NOW. Your laws are stupid!! We love entertainment. I\'d copyright all i want!! Problem? I\'d do it to entertain friends, Family and even strangers!! You pass and you\'ll be hated everywhere in the world! Why can\'t you fat fuck americans get this in your uneducated heads?!

Topped by this one:

But perhaps in the overheated minds of the angry Boing Boing reader, it's all part of the same giant conspiracy. Look very closely at these pictures:

Is that really a tractor? And that may look like a hen shed - but could it be a secret, RIAA-built holding facility for copyright criminals?