Scientists have found a way to stabilize and regulate the orbit of electrons in an atom, after drawing inspiration from the orbit of asteroids around Jupiter.

In 1913 Danish physicist Neils Bohr’s eponymous Model postulated atoms were formed of electrons orbiting a nucleus, much like planets around the sun – only using electrostatic attraction rather than gravity. Electrons have since been shown to be more akin to waves surrounding the nucleus, but teams in Austria and the US have shown they can be made to perform in the same way as planetary systems, and the technique can be used to change the overall size of the atom. 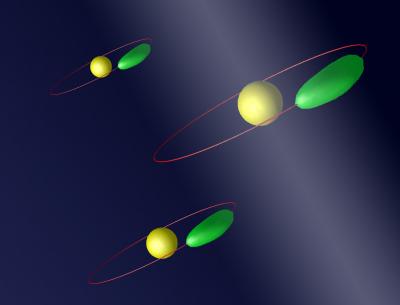 "Nuclei was born under a wandering electron..."

The research, published in the journal Physical Review Letters, was inspired in part by the function of Jupiter’s Lagrange points: Two specific points where forces of the Sun and the largest planetary gravity well in the Solar System cancel each other out. These collect matter, known as the Trojans, and the best guess is that the two belts contain more than a million asteroids over a kilometer in diameter.

“It’s similar to the way Jupiter sets the beat for asteroids,” Florian Aigner, science editor of Vienna University of Technology, told The Register. “It has a certain orbital period that’s well defined and you can’t slow down Jupiter. It acts like a metronome by applying repeated force. So you use an electromagnetic beam of light to apply force to the atom.”

A team at the Vienna University of Technology got the mathematics right and Rice University performed the actual experiment. They fired an atomic beam through a vacuum chamber and then crossed the stream with a tuned laser oscillating with the orbital period frequency of the electron around the nucleus.

The laser created a localized electronic state that moves in a near-circular orbit around the nucleus, and they could then extend and reduce the size of the orbit by modulating the laser’s frequency. The team got an atom up to the size of a human blood cell during testing.

“The level of control that can be reached with these techniques is remarkable, and has applications in, for example, quantum computing and in chaotic computing,” explained Professor Barry Dunning of Rice University.

However, the technique may also provide a route to the ultimate form of memory. It may be possible, much further down the line, to use the atoms to store information by regulating their size Aigner postulated. This would take storage to its near atomic level.

But it’s by no means there yet. The electron can only be controlled when the force is applied and then reverts to its natural state within a few cycles. Then again, Jupiter is not perfect either. Simulations suggest 17 per cent of the Trojans are unstable enough to fall out of the orbits and go wandering, potentially Earthward bound.

The next step is to see if the technique can be used on multiple atoms simultaneously, and to monitor how they interact with each other during operations. Aigner said the experiments showed the potential of mesoscopic physics to explore the boundaries between the quantum world and the physics of larger objects.

Sandwiched between venerable classical physics and the extremes of quantum studies, mesoscopic physics is very much the red-headed stepchild of the physical sciences, but has huge potential. It generally deals with objects from an atom up to 1,000 nanometers – about the size of the average bacterium. By investigating the boundaries between the sub-atomic quantum world and everyday physics, mesoscopic scientists hope to find usable results that could have applications in both fields. ®