Somehow, we still manage to inch-out the limits of Moore’s Law: in a double-whammy to end the week, IBM has demonstrated the smallest carbon nanotube transistor, and has claimed the world’s fastest graphene transistor.

The graphene transistor is something of a coup: its 100 GHz capability is the fastest frequency cutoff yet achieved by a graphene transistor. Big Blue’s announcement, summarizing a paper published in Science says its new device was created using techniques “compatible to those used in advanced silicon device fabrication”.

By being able to grow the transistor at a wafer scale (rather than producing a much smaller number of devices at a research scale), IBM has also demonstrated that the gap is closing between graphene in the lab and in a chip foundry.

“The breakthrough we are announcing demonstrates clearly that graphene can be utilized to product high performance devices and integrated circuits” said Dr T.C. Chen, VP for science and technology at IBM Research.

The 100 GHz chip is quite large by current standards – the gate is 240 nm long – but this, IBM says, leaves “plenty of space” for gate length to be scaled down. Even with this relatively long gate, the transistor outperforms a similar-scale silicon device, which it says would be restricted to around 40 GHz.

In its other announcement, made in Nano Letters, IBM is claiming the record for the smallest-ever carbon nanotube transistor. Their 9 nanometer device, the researchers say, is the first demonstration that carbon nanotubes can be fabricated at geometries better than 10 nm. 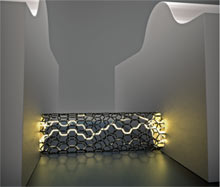 IBM's artists' impression of the carbon

Aaron Franklin, a researcher at IBM’s Watson research centre, told Technology Review it’s important to prove that nanotubes can be fabricated with such small feature sizes: quite simply, there’s not much point researching materials that can’t beat silicon’s geometry.

The company claims that the 9 nanometer nanotube transistor has lower power consumption than other devices at similar scale, while being able to handle higher current throughput, improving its potential signal-to-noise ratio. ®