NASA's exoplanet-hunting Kepler spacecraft has identified a slew of new subjects, adding 26 planets in 11 systems to its inventory.

"Prior to the Kepler mission, we knew of perhaps 500 exoplanets across the whole sky," said Kepler program scientist Doug Hudgins in a statement announcing the discovery.

"Now, in just two years staring at a patch of sky not much bigger than your fist, Kepler has discovered more than 60 planets and more than 2,300 planet candidates," he added. "This tells us that our galaxy is positively loaded with planets of all sizes and orbits."

Hudgins didn't elaborate on exactly what he meant by that well-examined patch of sky being a bit larger than your fist, but we can only assume that he's referring to a fist being held at arm's length – and if that's the case, the sky being "positively loaded" with exoplanets may even be a bit of an understatement.

These latest planetary discoveries, announced Thursday, nearly double the number of verified planets, and – perhaps more interestingly, since it gives space scientists more and more-interesting systems to chew on – it raises from five to 16 the number of multi-planet systems that have been discovered. 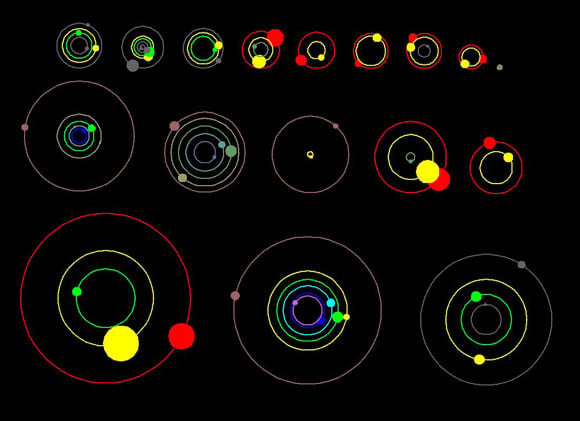 The planets in this latest batch vary greatly in size from about one and a half times as large as Earth's radius to bigger than Jupiter – which, as we all remember from our school days, has a diameter of about 141,700 kilometers, or 88,000 miles.

Each of the 26 new planetary discoveries orbit their suns more closely than our Venus orbits Ol' Sol. Accordingly, their orbits are rather snappier than Earth's, ranging from a comparatively leisurely 143 days to a dizzying six.

Some of the systems include planets whose gravitational pull on one another can be detected in the variation of the time they take to transit their suns, from Kepler's point of view. "These configurations help to amplify the gravitational interactions between the planets, similar to how my sons kick their legs on a swing at the right time to go higher," said lead author of a paper confirming four of the systems, Jason Steffen of Fermilab in Batavia, Illinois.

We can only assume that Steffen's use of the word "sons" was done in full recognition of boffinary punnery.

Kepler, by the way, travels in a heliocentric orbit that NASA describes as "earth-trailing" – and seeing as how it completes one orbit in 372.5 days, its distance from Earth is slowly increasing. Its mission, however, is expected to last from between 3.6 and 6 years, so there's no worry of us catching up to it before it becomes space junk.

You can download a large image here that includes all the planets that Kepler has discovered to be in multiple-planet systems, compared in size with our own solar system's eight fellow travelers, Earth included. ®