According to the consumer-focused researchers at NPD, worldwide tablet sales will increase more than fivefold over the next five years.

According to the latest NPD DisplaySearch Tablet Quarterly report, sales of tablets will surge from 72.7 million in 2011 to 383.3 million in 2017.

But NPD doesn't see tablet sales growth being driven solely by Apple's market-leading fondleslab. On the contrary, the researchers foresee growth coming from "the introduction of tablets from new brands, such as Aakash in India, and established brands, such as Dell in China."

While The Reg may quibble with what percentage of those 383.3 million tablets Dell may eventually snare, we concur with NPD that growth in the BRIC countries – Brazil, Russia, India, and China – will be strong if and when tablet prices dip. 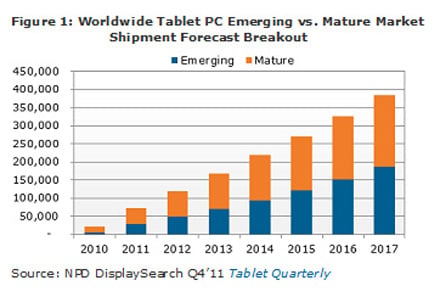 "Growth in the emerging markets will be accompanied by competition at lower price points," says NPD strategist Jim McGregor. "This will result in significant opportunities for processors that can optimize power and performance while achieving device price points that are often under $100."

That $35 Aakash tablet, for example, will cost around $50 once you add in documentation, packaging, shipping, and the like – a far cry from the $499-to-$829 premium for the "magical and revolutionary" iPad.

Whether NPD's near-400-million tablet estimate is correct, it's interesting to put that number in some context. Although the final numbers for last year's global PC sales aren't yet in, back in September Gartner analysts projected that 364 million PCs would be sold worlwide during 2011, and IDC forecast a similar number, 356.9 million.

iPad-maker Tim Cook wouldn't be the man to argue with NPD's figures. When discussing Apple's most-recent financial results last week, he said, "I clearly believe, and many others in the company believe, that there will come a day when the tablet market, in units, is larger than the PC market."

If that day arrives by 2017 – or earlier, considering PC-sales cannibalization by fondleslabs – it will almost certainly be ushered in by tablets that are far less expensive than Cook's offering. ®