Ihab Bishara, director of cloud computing applications at Tilera, says that three of the largest hyperscale data centers in the world have deployed Tile-based servers. With the Tile-Gx line, the 64-bitness and floating point instructions are attracting more interest, with a number of OEMs and ODMs placing orders for the chips even before they were sampling - even though the Tile chips have their own proprietary interconnect.

"Our view is, it is our ISA, get over it," says Doud, and for the Linux crowd that compiles its own applications anyway, he makes a good point. (Jumping to ARM chips will require a recompile, too, after all.) "Once you have a chip that is supporting C, C++, Java, and PHP and you're running Linux, it doesn't matter. People are not writing assembler programs."

Well, there are probably a few card-wallopers out there who are in mainframeland.

Tilera is putting the finishing touches on a Java JIT compiler, which should be done by the end of the first quarter, according to Bishara – and just in time to take on big Java workloads like Hadoop. The Tilera Linux stack is based on a derivative of CentOS that has around 2,000 packages ported over to run natively on the chips.

Tilera doesn't just expect to sell Tile-Gx processors as the main engines inside of systems. In some cases, customers will want to use them as offload engines. To that end, the company has cooked up an evaluation adapter card that slips into a PCI-Express 1.0 or 2.0 slot and runs the Tilera Linux environment. 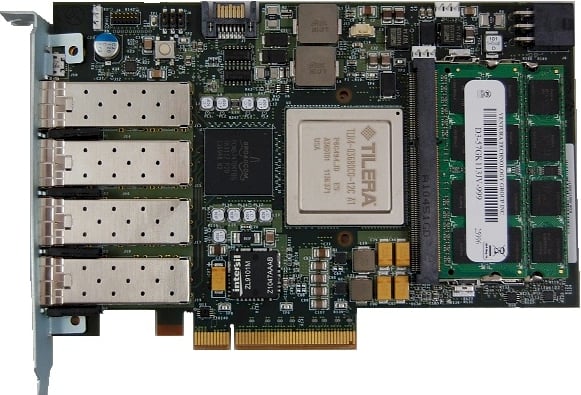 The Tilencore-Gx36 development card comes with a 36-core Gx8036 processor with two DDR3 SODIMM memory slots that can support 1GB to 4GB of memory each. The card has four external SFP/SFP+ ports that can run at either Gigabit or 10 Gigabit Ethernet speeds. There's a big fat PHY that converts the virtual I/O on the Tile-Gx chip so it can talk to the physical Ethernet ports on the card, and it has a USB 2.0 port and a SATA interface. The Gx8036 chip runs at 1.2GHz on this adapter.

If you want to go all out and play around with a full development system instead of a coprocessor for an x86 or RISC server of your choosing, then Tilera is sampling the chips inside of the Tilempower-GX development platform, seen here:

This development server puts a single Tile Gx8036 running at either 1.2Ghz or 1.5GHz into a system board with four memory slots- this fits Intel's definition of a microserver, by the way. The server is equipped with low-profile DDR3 main memory and has the same four Ethernet ports and a dual-port SATA disk controller and a single PCI-Express 2.0 x8 slot coming off the virtual I/O on the TileGx chip.

If you are really serious about putting the Tile-Gx chips through the server paces, Tilera will get you what it calls its Liberty-Gx platform, which crams four of these microserver boards into a single 1U rack machine.

The Tile-Gx processors sampled last July in limited quantities to selected partners, and alpha evaluation boards shipped in September. The company racked up ten design wins for the chip by November and has decided to "open up the flood gates" and do much more sampling in February with volume shipments to begin in March. The full-on Gx8016 is expected to cost around $450, with the Gx8036 at around $650. Presumably the parts aimed at servers will cost less, since some features are deactivated.

The 64-core and 100-core variants of the Tile-Gx chips will sample in late 2012 and ship sometime in the first half of 2013, according to Doud, and the company is on track with its 200-core "Stratton" chips with a shrink to 28 nanometers.

"We're here today shipping a 64-bit processor core and we are what looks like two years ahead of ARM," says Bishara. "The architecture of the Tile-Gx is aligned to the workload and gives one server node per chip rather than a sea of wimpy nodes not acting in a cache coherent manner. We have been in this market for two years now and we know what hurts in data centers and what works. And 32-bit ARM just is not going to cut it. Applied Micro is doing their own core, and that adds a lot of risks."

Tilera should know a thing or two about that. It didn't just do its own cores, but its own instruction set and what really is a system on a chip.

No one knows how this will turn out, with server makers just trying to make a buck and take as few risks as possible. But one thing is for sure. Intel and AMD have a lot more problems than just each other from here forward. ®