The Freedom interconnect has the same 1.28Tb/sec of aggregate bandwidth on that 3D torus as the prior generation, and it can support up to 16 external 10GE links or 64 external Gigabit links as well. That hasn't changed. Each socket in the Xeon machine obviously gets more bandwidth into and out of the interconnect, since there are 64 sockets across that 1.28Gb/sec instead of 384 with the most capacious Atom machine that SeaMicro sells.

But with the Xeon version of the SeaMicro box, engineers had to hack functions into the interconnect that could reach into the Intel C200 chipset and the Xeon E3 chip and turn off all the junk on this Sandy chip, which is also used for workstations and, in a slightly modified form, in high-end PCs, and start shutting things down. So, for instance, with the disk I/O all virtualized by the SeaMicro interconnect, there's no need to power up the SATA interface on the Intel chipset. Ditto for the USB ports on the chipset or the HD 2000 graphics controller on the Xeon E3 itself. 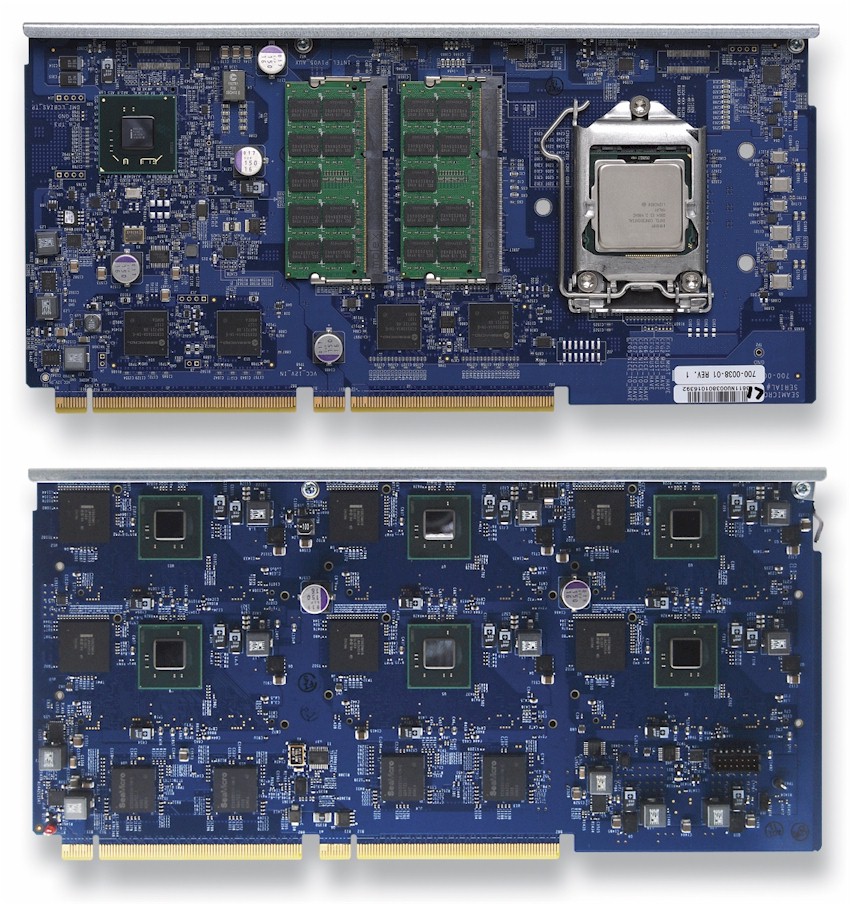 The upshot, says Feldman, is that the SeaMicro motherboard runs an E3 chip for server workloads more efficiently than other motherboards will be able to, since they cannot power down these features. A fully loaded SM10000-EX with 64 Xeon E3-1260L processors with 32GB of DDR3 main memory each consumes somewhere between 3.2 and 3.5 kilowatts running heavy workloads, according to Feldman. So a rack with 256 nodes and 1,024 cores weighs in at around 12.8 to 14 kilowatts.

That Xeon E3-1260L chip has 8MB of on-chip L3 cache and a a maximum TurboBoost speed of 3.3GHz. It also supports HyperThreading if your workload is amenable to simultaneous multithreading. It has a thermal design point of 45 watts.

SeaMicro is focused like a laser on performance per watt, and that is why it is not supporting other Xeon E3 chips. It is also why the company is teaming up with Samsung Electronics to make use of a SODIMM memory module based on 1.35 volt DDR3 memory chips made in Samsung's 30 nanometer processes that is based on 4Gb memory chips and that burns about a quarter of a watt per gigabyte. Using regular 1.5 volt chips based on 1Gb memory chips etched in 50 nanometer processes burns about 1 watt per gigabyte, and moreover, the registered DIMM memory sticks are about twice as large and not particularly well suited to a dense-packed multinode cluster like the SeaMicro SM10000-XE.

The SeaMicro system is more than a bunch of server nodes linked by a 3D torus interconnect. That home-grown torus interconnect ASIC also virtualizes disk access and Ethernet networking for each of the Atom and now Xeon servers in the chassis. The system also has a field programmable gate array (FPGA) to do load balancing across all server nodes, and these circuits are hooked into the SM10000's system management tools to allow for pools of servers to be grouped together and managed as a single object and to provide guaranteed performance levels for groups of processors, disk, memory, and fabric. The fabric doesn't have a name, but this function performed by the fabric is called Dynamic Compute Allocation Technology, or DCAT. The SeaMicro chassis supports up to 64 SATA disk or solid state drives and Gigabit Ethernet (64) or 10 Gigabit Ethernet (16) uplinks out of the back of the box to reach the outside world. The server cards plug into the SM10000 chassis and backplane through two PCI-Express 2.0 slots. The backplane currently supports 128 of these PCI slots for hooking in server boards. (Two columns of 32 slots on each side of the chassis.)

SeaMicro is privately held and does not report revenues, but Feldman says that sales during its first full year of business are better than Juniper Networks, Riverbed, 3PAR, and a bunch of other startups during their first full year of biz. "We are selling these boxes absolutely as fast as we can make them," says Feldman. "We revised our forecasts upwards twice last year and beat them."

There's some interesting future possibilities for the SeaMicro machines. First, SeaMicro could extend that torus interconnect to span multiple chassis. Second, it could put a "Patsburg" C600 chipset on an auxiliary card and actually make fatter SMP nodes out of single processor cards and then link them into the torus interconnect. Finally, it could of course add other processors to the boards, such as Tilera's 64-bit Tile Gx3000s or 64-bit ARM processors when they become available. ®