The Japanese space agency (JAXA) has confirmed a new mission to collect samples from an asteroid and return them safely to earth, and has set the target as 1999 JU3 - one of the damper asteroids in range.

“We’re expecting the asteroid to be rich in hydrated minerals and, we believe, in organic compounds - long carbon chains with hydrogen that may be the building blocks for life for life on Earth,” University of Central Florida professor Humberto Campins, author of a 2009 paper on the asteroid, told The Register. “The last rock JAXA visited was very dry, but this asteroid is primitive, as in it has received very little heating, and it may contain organic materials or even water.” 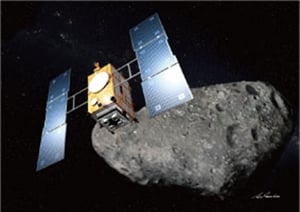 Bringing home the compounds in 2020

The Hayabusa 2 mission will blast off in 2014 (although contingency plans are in place to delay the launch until 2015 if needed,) and should reach the 3,000ft asteroid 1999JU3 by mid-2018. Once there it will drop an impact device from around 1,000ft, which will detonate when it hits the surface. The probe will land in the impact zone and excavate samples from the core material of the asteroid and return in 2020.

In 2003 JAXA launched the first Hayabusa probe, which did succeed in bringing back a sample from an asteroid for the first time, albeit in microscopic quantities. The probe suffered a series of malfunctions in its propulsion and sample collection systems, but landed in the South Australian outback in 2010 with a tiny amount of dust on board. Nevertheless several papers have been published on the samples and Campins said JAXA deserved credit for being the first to succeed. In terms of funding JAXA is tiny, but it has produced impressive results, he said.

Seven years of effort for dust

With the new mission it is hoped scientists can get a detailed look at the composition of the asteroid, and find organic chemicals that could have formed some of the essential building blocks of life on Earth. Such chemicals could have stimulated the beginning with organic life on the planet, rather than having them form terrestrially, he said.

Campins explained that in the early stages of the Earth’s development, before the surface had cooled to a crust, the temperatures involved would have destroyed any organic life. The Miller and Urey experiment has shown that it would be possible for organic compounds to form by mixing inorganic chemicals and applying electricity to stimulate lightning, but he suggested there may be a simpler solution.

“We know that organic compounds are found in these objects, and asteroids and meteors would have been much more common in the early stages of planetry formation – we’ve only got the dregs of them now,” he said. “Organic compounds can form naturally on Earth, but it’s a slow process, and what’s the need when there’s this great inventory that can be delivered from space? Maybe both functions had a role.”

The Japanese are not the only ones with asteroid collection in mind. The European Space Agency is mulling the Marco Polo-R probe and in 2016 NASA will launch the Origins-Spectral Interpretation-Resource Identification-Security-Regolith Explorer (OSIRIS-REx) on a course with asteroid 1999 RQ36. On arrival in 2019 it will spend a few months mapping the surface to find a survey spot, then bring back a couple of ounces of material for study – if all goes according to plan.

While the search for extraterrestrial organic compounds is all very interesting, these trips also have other purposes. While none of the asteroids being visited are in any danger of impacting Earth, the ability to successfully send a mission to an threatening asteroid - if it were discovered in time – could be crucial, as too would be information on the composition of such objects. 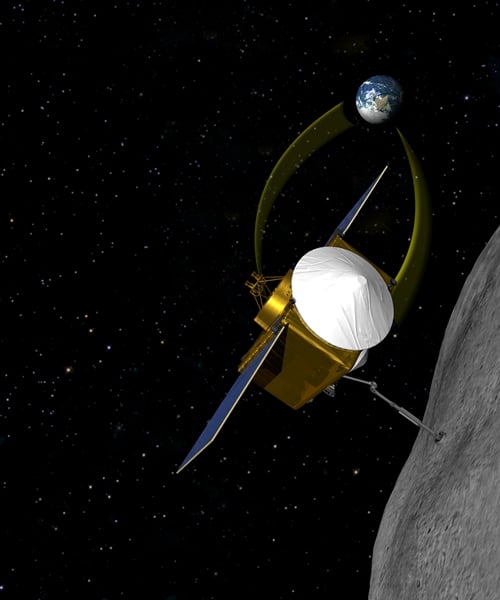 One of the key goals of the OSIRIS-REx mission is to study the Yarkovsky effect, the ability of the sun’s energy to affect the trajectory of rotating material in space. Such information will be key to assessing the viability of some asteroid deflection plans being formulated by NASA.

Deflecting such an object from Earth’s path, by focusing solar energy effects on the object for example, would be preferable to destroying it – if such a thing were even possible. While Hollywood understandably prefers the latter approach, the likely outcome would be lots of “little” hits instead of one big one, with added bonus of radioactive contamination. As Arthur C. Clarke postulated, pushing the thing out of the way would be a much more sensible solution. ®