'My life is officially ruined'

Popular torrent search engine BTJunkie – nothing to do with BT – is voluntarily closing, according to a notice posted on the site, without offering a reason. The site has indexed other torrent trackers since 2005, and was the fifth most popular Torrent site.

"It's the end of an era", reckons one piracy fansite. BTJunkie users took to Twitter to express their disappointment: 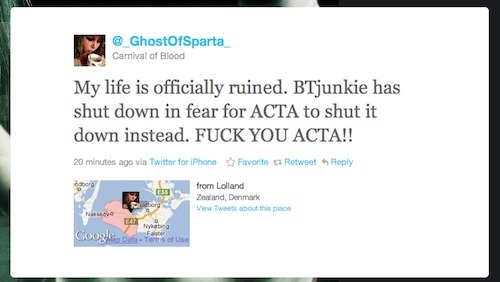 The site has not been on the receiving end of litigation from copyright-holders, and it's hard to see what recent legislative changes might have caused the operators to reconsider. ACTA has been watered down, leaving copyright-holders with nothing new, while SOPA has been shelved. And the recent high-profile bust of MegaUpload and its bosses took years of electronic monitoring and co-ordination between various agencies on a huge scale.

Perhaps the perception of increased risk did the trick. Or maybe they just got bored, and wanted to go out with a bang. ®