Is it an upgrade problem, or a user problem?

The data comes from Crittercism – monitoring software that records app crashes as a percentage of app launches and makes money by sending reports and diagnostics to the app's creators. After looking at data taken about app crashes between 1 and 14 December 2011, the company have discovered that Apple apps are more likely to crash and burn on you than the equivalent apps on Android.

The numbers are small but in the top tranche of the most popular apps - 0.51 per cent of app launches resulted in a crash on iOS devices compared to 0.15 per cent on Android phones and tablets. 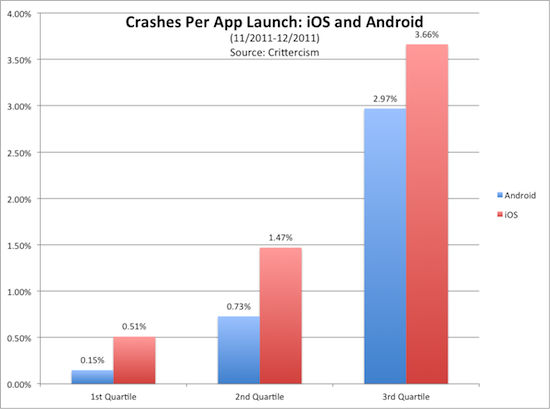 App crashes by OS, for apps measured by popularity

In an interview with Forbes, CEO of Crittercism Andrew Levy lists out a variety of reasons why apps fail: a big one being the frequency of upgrade of both operating systems and the apps themselves.

In the sample that the company measured there were 23 versions of iOS – ranging back from iOS 3.1.3 to the latest iOS 5.0.1 – and 33 versions of Android in use.

Other crash-inducers included problems with third-party software such as ad-servers or analytics systems. Blips with internet connection or a switch from 3G to Wi-Fi could send an app down and then there is more potential for hiccups when apps connect to hardware - GPS connections or cameras.

iOS's comparatively weaker performance could be down to the recent roll-out of iOS5 and the usual teething problems with a new operating system. Comparatively, Android's brand new 4.0 isn't very widespread, so most Droiders are on the relatively steady older versions.

But it's not just a coincidence of timing - Android's better performance could be because Google let their developers roll out fixes and updates quicker. And Android has a nifty auto-update feature for apps, not available on iOS. Users can be slow to apply updates on their own.

Crittercism has funding from Google Ventures. ®