Russian scientists have drilled through to a 20-million-year-old lake under Antarctica, which, depending on who you listen to, could harbour alien life forms, prehistoric microbes or Hitler's secret hideout. 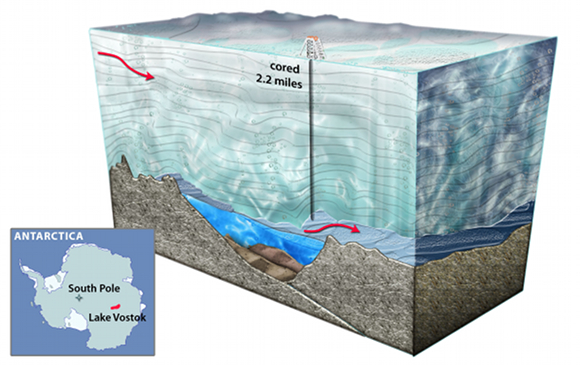 Lake Vostok, the subject of much rumour and controversy, lies around 3,700 metres beneath thick ice and it took the research team more than 30 years to drill through to it. The lake has been sealed off for millions of years with nothing able to get in or out, so any lifeforms found within are likely to be completely unique.

“According to our research, the quantity of oxygen there exceeds that on other parts of our planet by 10 to 20 times. Any lifeforms that we find are likely to be unique on Earth,” chief scientist of Russia’s Antarctic Expedition Sergey Bulat told Russian TV network RT.

The only other place that might have similar conditions is not on Earth at all - but on Europa, a satellite of Jupiter, leading boffins to speculate that if life is found in Vostok, it may be found there too.

The chance of discovering life, microscopic or monstrous, in the lake depends on the global science community's hope that the network of subterranean lakes in Antarctica were formed when the place was a cosier, more homely setting back in prehistory. If the lakes were actually formed by melting ice, the chances of finding any life are extremely slim.

If boffins' dreams come true, then the creatures that lived in these lakes way back could have found unique ways to evolve and survive beneath the ice, giving science a whole raft of new things to study and providing pointers as to how aliens could be living on relatively inhospitable planets.

Which naturally leads some to worry about what might be down there. Apart from prehistoric monsters, parasitic aliens or other monstrosities from the fertile imaginations of TV and movie writers, there are the more realistic fears that undiscovered and potentially lethal viruses and bacteria could be lurking in the deep.

However, the Russians have already sought to alleviate these concerns by letting everyone know that they'll be blasting radiation all round them to ensure nothing sinister emerges.

"Everything but the samples themselves will be carefully decontaminated using radiation. There is no need to worry,” said Valeriy Lukin, head of the Antarctic Expedition.

All of boffinry is dying to know what's down there, but the Russian expedition has upset some Western parties, including the Brits and Americans, who are also busily drilling or about to drill down to subterranean lakes in Antarctica.

Professor Martin Siegert, head of the school of geosciences at the University of Edinburgh, told newswire AFP that the drilling was "a milestone" and "a major achievement", but pointed out that scientists were concerned that the methods the Russians had used to get to the lake could pollute the research. 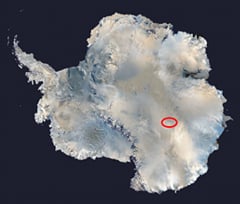 Initially, the Russian expedition was using kerosene as antifreeze to speed its drilling, although it later switched to the more environmentally friendly freon.

"It's very difficult for them to convince that their experiment is going to be clean, when you have essentially two miles of kerosene to cross before you get to the lake surface," Siegert said.

The prof is about to lead a Brit expedition to drill down to Lake Ellsworth, but it plans to use hot-water drilling to get there.

However, the Russians have dismissed these mutterings as nothing more than spite because the other expeditions didn't get to a lake first.

“In 2010 we gave our final environmental assessment to the Antarctic and Southern Ocean Coalition – a union of Western environmental NGOs – and to their greatest regret, they had to accept that the Russian expedition was not doing anything wrong,” Lukin said.

The flurry of activity on the ice-bound continent has also excited some Second World War conspiracy theorists and history buffs, who theorise that the Nazis had a secret base on Antarctica built back in the 1930s. According to Russian newswire RIA Novosti, back in 1943, Grand Admiral Karl Donitz was quoted as saying that "Germany's submarine fleet is proud that it created an unassailable fortress for the Fuhrer on the other end of the world".

The secret hideout is believed to have been constructed at Lake Vostok and could contain old Nazi archives. Nazi naval archives claim that after the Germans surrendered in 1945, a submarine U-530 arrived at the South Pole, where they built an ice cave and stored relics from the Third Reich and Hitler's secret files.

Later, according to even wilder rumour, a submarine U-977 arrived carrying the remains of Hitler and Eva Braun, so they could be stored for DNA cloning purposes.

Conspiracy theorists here at The Register are also wondering what happened to the Russian scientists during the time they disppeared. At the end of last week, the team was reported missing by a number of US sources, quoting American colleagues the Russian expedition had been keeping radio contact with. At that point, they had been radio silent for five days, but when they last reported in they were 40 feet from their goal.

The next announcement was that they had reached the lake, without any mention of why they had been out of touch. Anyone who's ever seen a horror movie has to wonder, what if they reached the lake days before they reported back in? Let's hope the Russians also plan to check whether their scientists have been taken over by parasitic lifeforms... ®