'Teething problems' with software in Salford

A glitch on BBC News that accidentally labelled a child as a recovering alcoholic is a symptom of endemic problems with the Salford Media City's software, The Reg has been told by a BEEB insider, though BBC dismisses the mistake as a "teething problem".

A captioning slip-up caused the image below to be broadcast on BBC News North West two days ago (ably screen-grabbed by Twitter user @Andy_Barton). 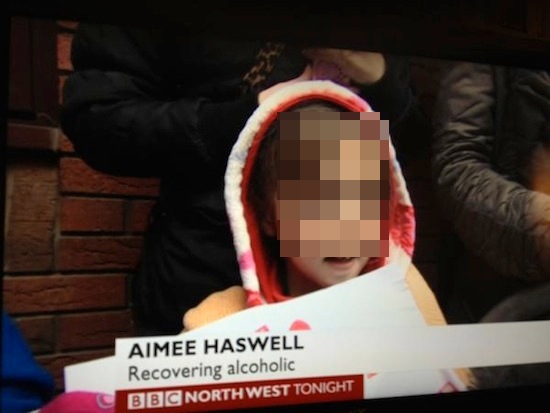 But the captioning trip-up wasn't just the result of a tired producer, said our anonymous source: "Once a mistake has been entered into the computer," they explained, "the director in the TV gallery can do nothing to stop it. The software won't allow it."

Our anonymous correspondent said that this was just one of several tech problems that has plagued the new TV studios in Salford – problems that our emailler says stem from the use of a patchwork of different services: "Lots of different software firms have produced software [programs] that won't properly talk to each other, and they always blame the other guys."

An internal email from earlier this month, sent by Salford tech manager Steve Jackson to all staff, and seen by The Reg, details 10 IT problems that are currently affecting production. These range from failing clocks and non-responsive robotic cameras to the inability to control the sound desk. In one case cited by Jackson, the morning programme appeared to have lost half a bulletin due to a technical mix-up.

The studio currently only broadcasts BBC North West programmes, but will be shortly taking on production of national show BBC Breakfast, which moves up to Salford in the next few months.

Responding to the criticism of their software, a spokesperson for BBC North West explained the captioning mix-up:

It wasn’t a technical error but rather just a simple case of people getting used to the new systems. With the introduction of any new systems, teething problems are to be expected.

Of the problems detailed in the internal email, the spokesperson said that "many of the issues listed in that particular email have been rectified or are in the process of being fixed".

On the question of the software programs failing to communicate, the spokesperson said that there are no incompatibilities in the system, though he reiterated that the newly installed systems in Manchester were experiencing "teething problems". ®

Backdoored SolarWinds software, linked to US govt hacks, in wide use throughout the British public sector

And what's the impact of months-long compromise? UK.gov won't say – as CISA orders shutdown of machines

It's June, and you guessed it! Pork barrel time for resellers as £500m public sector framework gets go-ahead