That’s not as straightforward as it sounds. As Sydney University-based astronomer Dr Sean Farrell explained to The Register, the midrange black hole has been elusive.

“In the large galaxies, we see evidence of supermassive black holes in every one of them. And there are plenty of observations of stellar-sized black holes”.

The intermediate black hole, Dr Farrell said, has been predicted for a long time but not observed. Since the scale of the supermassive black hole scales nicely in relation to the scale of the galaxies they inhabit, it wasn’t hard to believe that a dwarf galaxy would have a suitably-sized black hole at its centre.

That’s what Dr Farrell believes his team has confirmed, in visible and infrared images of a galaxy called ESO 243-49, about 290 million light-years distant. Out towards the edge of the galaxy is a cluster of young blue stars which he argues is a dwarf galaxy, designated HLX-1*, that’s been ripped apart in a collision with ESO 243-49 – exposing the intermediate black hole at its centre.

(*HLX-1 – Hyper-Luminous X-Ray source 1. Not so many astronomers get to be the ones to attached the number 1 after a new designation.)

The black hole, he says, is estimated to be around 20,000 times the mass of our sun, and its remnant collection of stars are “what would be explained by it being a dwarf galaxy that’s been ripped apart”.

Dr Farrell said he was confident that he was looking for a black hole ever since the original X-ray observations, since those showed the characteristic X-ray signals of material in the black hole’s accretion disk. However, the optical observations turned up too much light to have come from the accretion disk alone. 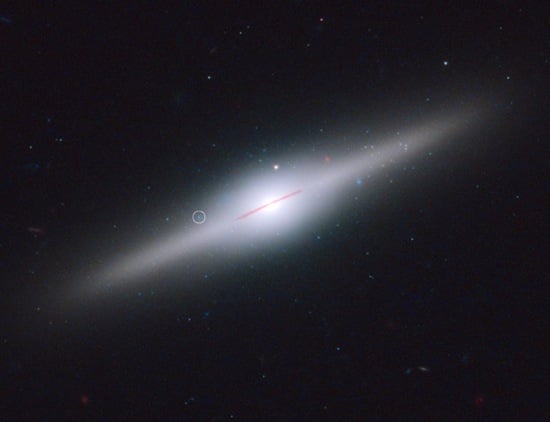 HLX-1 at the edge of ESO 243-49, courtesy of the Hubble Space Telescope

There were, he told The Register, two possible solutions that could explain what was observed from the X-ray observations and the Hubble images: either a young cluster of stars centered on a black hole, or a very old cluster with a very bright gas disk.

“The problem with the ‘old cluster’ scenario is that it required too bright an accretion disk”, Dr Farrell said.

As well, he said, it appears that “this was a dwarf galaxy that has recently punched its way through a larger galaxy – that would have compressed the gas in the dwarf galaxy, and triggered star formation.”

The large version of the Hubble image is here, and the Hubble announcement is here. Dr Farrell's article can be seen at Arxiv, here.®