When a star system called Eta Carinae went on a weight-loss program in the 19th Century, it did so in spectacular style: in its 20-year “great eruption”, it was the second-brightest star in the sky, shed ten solar masses, and left echoes of light that have just been detected.

The reflections described in this study in Nature give us the first hints at what caused the violent explosion during which the binary star “exceeded the Eddington luminosity limit for ten years”*.

A well-known and well-studied star system, and one of the most massive binaries in the Milky Way galaxy, Eta Carinae was identified in 2005 as a binary system with a large blue primary and a much smaller companion.

What’s got the world of astronomy excited about the new study is that the researchers have captured “light echoes” from the Great Eruption bouncing off dust a hundred light-years away from the system. 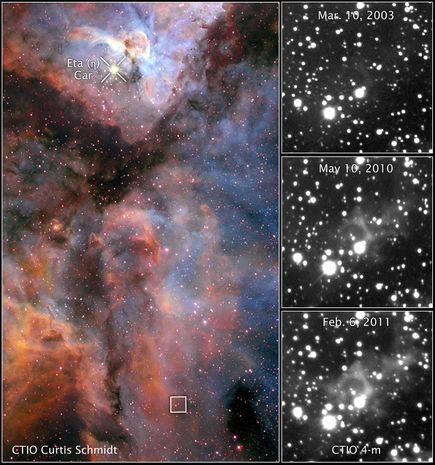 astronomers identify reflections growing more luminous from 2010 to 2011 (right-hand side).

This, according to Baltimore astronomer Armin Rest of the Space Telescpe Science Institute, gives us the first chance to sample light emitted during that eruption, and a better understanding of its trigger.

Once considered part of a class of objects called “supernova imposters”, the 7,500 light-year-distant Eta Carinae is regarded as something of a ticking bomb: astronomers expect it to explode properly at some point, and would like to predict when.

The sampled light, at 5,000 kelvin, is too cool for a supernova imposter (typically 7,000 kelvin) – something that surprised Augusto Damineli, who originally discovered the binary nature of Eta Carinae in 2005. The astronomer from the Insittute of Astronomy, Geophysics and Atmospheric Sciences at the University of Sao Paulo in Brazil told Nature “All well educated astronomers would have bet that they would find the spectrum of a 7,000 kelvin star.”

With these observations in hand, Rest’s team will go to work testing different theories about what triggered the Great Eruption. It’s possible that the highly elliptical orbit of the smaller partner in the system holds part of the answer: it swings so close to the larger star that their solar winds interact.

Rest now hopes to gather reflections from other sources, to try and reconstruct light emitted from Eta Carinae over more of its Great Eruption period, to try and get a better picture of what the event looked like.

*For non-astronomers: the Eddington luminosity limit predicts how brightly a star can shine, and remain in a steady state. Objects exceeding the limit are assumed to be losing mass. ®