Spacekeeper satellite to disintegrate in atmosphere

The US and Russia may be working on Mars missions, but the galactic ambitions of the Swiss are far more modest: they want to tidy up the Earth's atmosphere. The clock-and-choc-making country today announced plans for a rubbish-grabbing space bot. 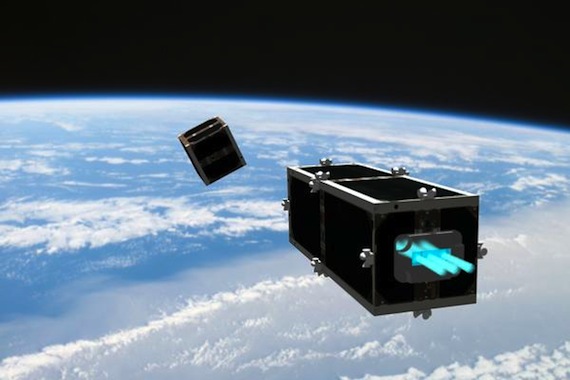 The tiny 30cm-long (11.8-inch) CleanSpace One from the Swiss Space Center at the University of Lausanne will claim the title of the first janitor satellite.

The satellite will target a specific bit of junk, align its orbit with the hurtling space rubbish, grapple it with a four-pronged gripper and chuck it down into the earth's atmosphere in a fiery death plunge. 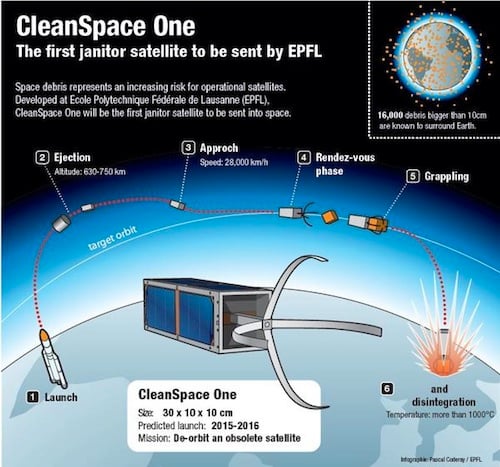 The grappling mechanism will be "inspired from a plant or animal example", according to a vague description on the EPFL website.

It's high-risk rubbish removal: if it goes wrong and there's a collision then we'll all end up with even more bits of debris, requiring even more debris-clearers.

Junk in orbit is a serious problem: jettisoned rocket and satellite components can - and have - damaged functioning space satellites. NASA are tracking approximately 16,000 objects larger than 10cm in diameter, but hundreds of millions of smaller particles are ripping around the Earth at speeds of several kilometers per second.

The international space station had to alter its course to avoid some flying junk as recently as 29 January, according to the EPFL. And it's not just space research that's at risk – systems from GPS to TV rely on satellites, as the Aussie PM recently pointed out, and the cost of a junk collision could be huge.

The Swiss want to create a "family" of the junk cleaners, and they hope that eventually the janitor-bots will be able to survive their rubbish-clearing trips and take out more than one piece of space crap in their lifetimes.

According to the Swiss Space Center, the design and construction of CleanSpace One, and setting it on its maiden voyage, will together cost about 10 million Swiss francs (£6.87m). The Swiss hope to have the grabber in the air within three to five years. ®