Tiny transistor stays where it's put

Doing well with silicon and phosphorus – one atom at a time

The team that earlier this year characterized a four-atom wire that obeys Ohm’s Law has now demonstrated a repeatable single-atom transistor.

While single atoms have been observed acting like transistors in the past, the ‘device’ demonstrated by the UNSW, University of Melbourne and Purdue team is exceptional in that it has been engineered and can be built repeatably.

And with high precision: by creating a well-like structure to contain the atom, the researchers claim they’ve eliminated the 10nm positional uncertainties now observed in single-atom transistors.

As Dr Martin Fuechsle, lead author of the group’s paper (published in Nature Nanotechnology) explains, this accurate positioning is needed “if you want to use it as a qubit”. It was achieved by lifting one silicon atom out of a group of six using a scanning tunnelling electron microscope, and replacing it with the phosphorus atom.

The structure includes markers that allow researchers to attach contacts to it and apply a voltage. 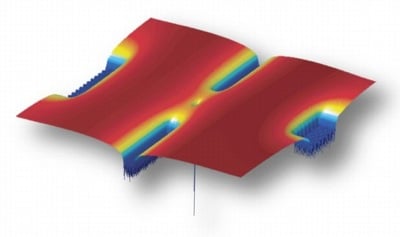 The single phosphorus atom in its well in the centre

of a silicon crystal, shown in this Purdue simulation.

While the transistor exists as a single phosphorus atom, the entire structure is a little bigger: the atom has to be confined in a well or channel in a silicon crystal. It also needs to be kept at -196°C to operate, as Purdue’s Gerhard Klimeck explains.

“The atom sits in a well or channel, and for it to operate as a transistor, the electrons must stay in that channel.”

This explains the need for cold: “At higher temperatures, the electrons move more and go outside of the channel”.

"By achieving the placement of a single atom, we have, at the same time, developed a technique that will allow us to be able to place several of these single-atom devices towards the goal of a developing a scalable system,” says Michelle Simmons, director of UNSW’s ARC Centre for Quantum Computation and Communication.

Such techniques are also important, she says, because it allows an exotic device to be built using materials familiar to the computer industry.

A UNSW video discussing the technology is below. ®