The cash cow is dying - slowly

Industry analysts at Ovum reckon mobile network operators lost more than $13bn in 2011 as SMS finally gets replaced - a staggering estimate backed by stats from Allot.

Ovum's figures are just experts' guesswork, but Allot's data comes from the traffic generated by around 250 million mobile users - and the news is the same: text messaging isn't the cash cow it once was, at least not for the network operators, and messaging is migrating from the cellular to the internet-based world.

But what's most interesting is that among the free messaging services, such as Facebook and Yahoo!, 18 per cent of 'net messaging traffic is now being generated by WhatsApp - a paid application that seeks to replicate the text experience, standing in stark contrast to the ad-supported services that hope to make money from advertising aimed though behavioural analysis. 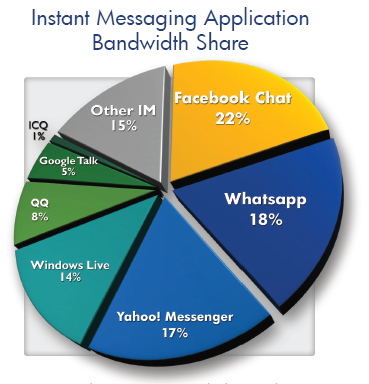 Facebook still accounts for the biggest share, and Yahoo! Messaging is only just behind, but both are free and Yahoo! is declining while Facebook has admitted it needs to squeeze more money out of its mobile users. WhatsApp only costs a dollar (annually if you're on Android), and like all the messaging systems it needs to be installed at both ends, but it's interesting to see such explosive growth in an application which has been possible (and predicted) for a decade or so.

Ovum reckons all that IM traffic still only accounts for nine per cent of the messages sent, SMS is still the dominant platform for the moment at least. Ofcom reckons network operators need to embrace application providers to prevent all their revenue draining away, but it's tough to claim a share of the revenue when that revenue is zero.

In voice services Skype has some income, thanks to SkypeOut and other premium services, and is now handling 82 per cent of VoIP traffic according to Allot, but highlighted in the report is the growth of Viber who've come from nowhere to claim more than two per cent (more than Google Talk and Windows Live) with no discernible revenue stream at all.

Smartphones have enabled third parties to sell services direct, bypassing the network operators entirely, and as long as the offerings are funded by venture-capitalists (see Viper) or companies with unfeasibly capacious pockets (see Skype, now owned by Microsoft) then it's damn hard to compete. Network operators will hope that when the money runs out they'll be the ones left standing, which is why they should be scared of WhatsApp. ®