Ace and Mini head to Blighty

Samsung cast light on a couple of budget handsets this week and revealed both the Galaxy Ace 2 and the Galaxy Mini 2.

The refreshed handsets both run on Android 2.3 Gingerbread with 800MHz processors and 4GB of internal storage. 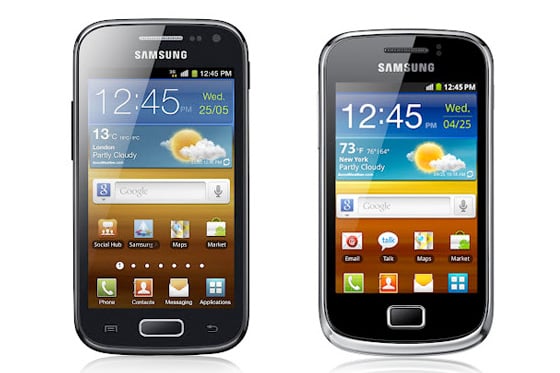 We had previously assumed the Galaxy Ace Plus announced in January was the followup to Samsung's original Ace, although the company confirmed to Reg Hardware that that particular handset is more of an 'Ace 1.5'.

The true successor is in fact this Galaxy Ace 2, which features a 3.8in display with a 480 x 800 pixel resolution. There's also a 5Mp rear-facing and VGA front-facing camera, a 1500mAh battery and HSDPA connectivity.

Both come packed full of Samsung apps, such as the Social Hub, Games Hub and Music Hub as well as Samsung's instant messaging service, ChatOn.

Exact prices and availability have yet to be revealed, but both blowers will touchdown in Blighty this April. ®