Google Goggle glasses ARE WATCHING YOU

Meat in the Cybernetic Sandwich

"So we have the human operator surrounded on both sides by very precisely known mechanisms," an American physicist called John Stroud once observed, referring to anti-aircraft gunners in the Second World War.

"And the question comes up, 'What kind of machine have we put in the middle?'"

Stroud went on to participate in the Macy Conferences that gave birth to the cybernetics movement - and his question is still very much alive. The cyberneticians viewed everything as a system, and the human was merely another cog in a larger system, one that's harvested for its "feedback".

Later this year Google is expected to unveil its Google Glasses, which are said to be a kind of HUD (Head-Up Display) projecting a constant stream of Web2.0rhea, contextual information, and (of course, this being Google) advertising. It's an ancient idea for sci-fi fans, and one tech watchers will be familiar with. Augmented reality on steroids, if you like.

Bango's Ray Anderson points us to a spread from 1988 in Personal Computer World, in which he'd been invited to imagine the computer of 2000.

"My idea was seen to be too 'way out' for 2000 - [and] included the novel ideas of a digital mobile network, virtual reality projected on head up glasses, force feedback gloves and a way of interconnecting a 'web' of users world wide," he notes wryly on his Facebook page. 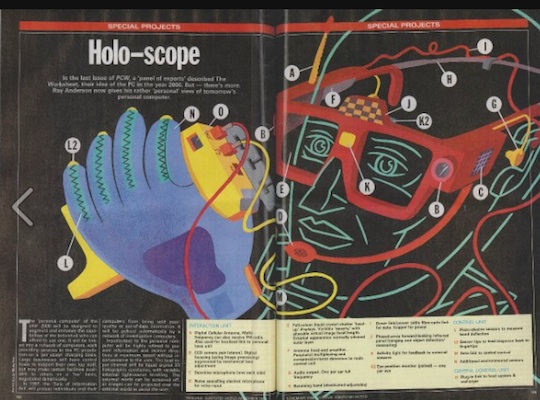 There is a twist, however, that's very Googley. The glasses will be watching you for behavioural feedback. You are the cog in a larger machine, constantly being monitored and harvested for feedback to send back to advertisers.

This makes the product, and its purpose, quite different than if it had been marketed by, for example, Sony or Nokia. Given this kind of ancestry, we might expect this to be an entertainment or communications device, or a remote control. Very handy such a thing could be, too, although since I'm always losing both my glasses, my phones and my remotes at home (or having them hidden by small children), it's another thing to go astray.

But Google is Google: it's an advertising broker that derives almost all of its income from inserting advertisements into your life, ads it expects you to think are relevant. For Google, augmented reality is the largest untapped billboard the world has ever seen.

It would be naive to think that the advertising potential would go untapped by anybody. If we're honest, advertising doesn't do much harm and actually funds a lot of good things, giving many people freedom and creative independence. Minority Report-style advertisements projected onto a personal HUD may, for some of people, be less intrusive or offensive than their real-world counterparts.

Every tic and pause in Google's database

But it isn't really the advertising that's the problem, it's the obsessive intrusion and collection. To fulfil the imperatives of behavioural advertising, Google is going to collect every tic and pause, and make mathematical inferences upon them. It fears that if it doesn't, somebody else will.

The funny thing about all this is that when you speak to the people at the top of the advertising agencies, as I do, you discover that even those fascinated by behavioural analysis don't actually need all this information. What matters most is simple demographics (gender, age, newspaper-buying habits) which they've had for ages. And they'd rather be collecting large amounts of money for creating visually striking and memorable advertising campaigns.

The people selling the products also wonder if they need all that data, too. Both sets of people privately ponder if it's just a bunch of hooey. And there must be Google engineers who, as Fake Steve wrote three years ago, are brilliant but possibly "bored to tears and totally disappointed because they really really really thought they were going to do something meaningful with their lives".

But driving this is a new kind of cross-industry data-gatherer, working to a mathematical, machine imperative. They tell the marketing chiefs and CEOs and agencies that they'll be dinosaurs if they don't get the data. But it's an information arms race with no winner, and no lasting benefit to humanity. Nobody feels able to challenge the nerds.