Eta Carinae on the fast track to supernova

Pic NASA's Hubble Space Telescope has captured a stunning shot of the Eta Carinae system's largest star suffering a near-death experience before it goes supernova in the near future. 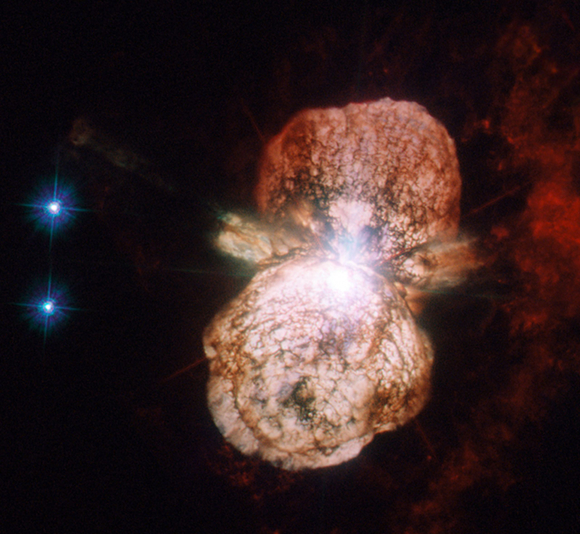 The beginning of the end for the Eta Carinae star. Credit: ESA/NASA

Earlier this month boffins published a study into the Eta Carinae star's near-nova explosion during which it shed ten solar masses*. The violent detonation was seen in 1843 and, discounting our Sun, made the heavenly body the second brightest star in the sky. The only star brighter was Sirius, which is nearly a thousand times closer to Earth.

Now the star is once more visible to the naked eye at night, although it's nowhere near as bright as it was back in the 19th century.

This pic shows the cloud of material, now known as the Homunculus Nebula, thrown out during the star's brush with death - what space boffins call a "supernova impostor event".

The image, consisting of ultraviolet and visible light images from the High Resolution Channel of Hubble's Advanced Camera for Surveys, shows that the debris from the event wasn't thrown out uniformly, but in a dumbbell shape.

Boffins are fairly confident that the Eta Carinae star is on its way out and they expect its supernova in the near future. Of course, this being in astronomical timescales, "near future" could be as much as a million years from now.

Whenever it does eventually go off, the star will be one of the closest to Earth to explode when there was someone here to see it, giving an impressive view to folks on the surface - Eta Carinae is only 7,500 light years away.

The brightest supernova ever observed was SN 2005ap [PDF], a star of the same type, located 4.7bn light years away and detected by the McDonald observatory in West Texas. ®