Facebook has dismissed allegations in The Sunday Times that the web giant's Android app can hoover text messages from phones as "creative conspiracy theorising".

Flatly denying the claim published by the broadsheet at the weekend, the social network's UK office said its app's ability to access text messages was open and transparent, and that Facebook isn't actually looking at text messages anyway.

“The Sunday Times has done some creative conspiracy theorising," the rep said in a statement: "The suggestion that we're secretly reading people texts is ridiculous. Instead, the permission is clearly disclosed on the app page in the Android marketplace and is in anticipation of new features that enable users to integrate Facebook features with their reading and sending of texts."

The permissions page for the Facebook app on the Android App Marketplace does clearly state this feature of the app: 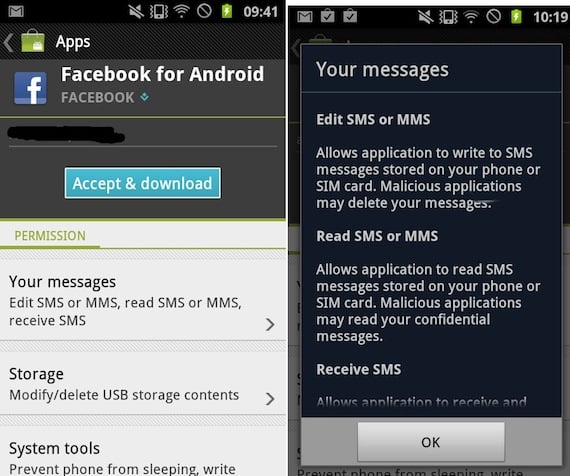 Facebook added that although its app does have the permission to read, send and edit text messages in a user's phone, it's not something it does. The biz said it has been using the feature to a "limited" extent to road-test a messaging service:

However, other than some very limited testing, we haven't launched anything so we're not using the permission.  When we do, it will be obvious to users what's happening.  We'll keep you posted on our progress.

The product under tests will require the SMS part of the phone to talk to the Facebook app, Facebook asserted. It's "a piece of dormant code used to run a limited internal test of a new feature," said the spinner.

The permissions issue is as much one for Google as Facebook: Apple's iOS walls off certain phone functions from third-party apps - including text messages and phone functions. But on Android phones that information is accessible to apps, provided the user agrees on downloading the app.

The Sunday Times article also highlighted that the YouTube app on Android was capable of remotely accessing and operating users' smartphone cameras to take photographs or videos at any time. The app store permissions reads:

Allows application to take pictures and videos with the camera. This allows the application at any time to collect images the camera is seeing.

Google did not respond immediately to a request for comment. ®