Bone-bothering boffins have reconstructed a giant prehistoric penguin species from fossils that were first found in New Zealand in 1977. 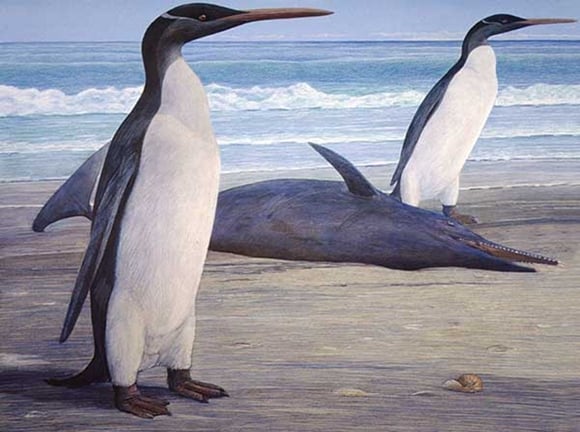 Ewan Fordyce, a palaeontologist at the island nation's University of Otago, found the ancient bones to make nearly an entire skeleton 35 years ago - and in the last few years enlisted the help of two more boffins from North Carolina State University to figure out what the huge penguin would have looked like.

New Zealand was a great place for penguins around 25 million years ago, during the Oligocene period, because most of the country was underwater leaving rocky islands scattered about where penguins could hide out from predators and forage for food.

The giant penguin, which the boffins named Kairuku after the Maori for "diver who returns with food", was one of at least five different species of penguin that lived in New Zealand at this time. The diversity of species is one of the reasons that figuring out what Kairuku looked like was difficult as well as its unique appearance.

Kairuku was more than a foot taller than the modern Emperor penguin and had a long narrow bill and narrow wing bones.

“Kairuku was an elegant bird by penguin standards, with a slender body and long flippers, but short, thick legs and feet,” Dan Ksepka of North Carolina State University said in a canned statement.

“If we had done a reconstruction by extrapolating from the length of its flippers, it would have stood over 6 feet tall. In reality, Kairuku was around 4-feet, 2 inches tall or so.”

The size and physique of Kairuku is interesting to boffins because it helps them figure out how far the birds swam.

"This species gives us a more complete picture of these giant penguins generally, and may help us to determine how great their range was during the Oligocene period," Ksepka added.

The boffins' findings were published in the Journal of Vertebrate Palaeontology. ®

Bork!Bork!Bork! It may have escaped the worse of coronavirus, but no one is immune to bork