NASA’s latest study into Arctic sea ice concludes that the oldest, thickest ice is disappearing faster than the thinner ice at the edges of the Arctic Ocean.

The Goddard Space Flight Center researchers say the multi-year ice is disappearing in a way that will make Arctic sea ice even more vulnerable to summer declines.

The study, published in the Journal of Climate, looks at how multi-year ice (that which has made it through at least two summers) has diminished over the last three decades. The observation is illustrated by NASA in two images showing the multi-year ice extent in 1980 and 2012.

NASA researcher, Goddard senior scientist Joey Comiso, is quoted as saying: “"The average thickness of the Arctic sea ice cover is declining because it is rapidly losing its thick component, the multi-year ice. At the same time, the surface temperature in the Arctic is going up, which results in a shorter ice-forming season.

"It would take a persistent cold spell for most multi-year sea ice and other ice types to grow thick enough in the winter to survive the summer melt season and reverse the trend." 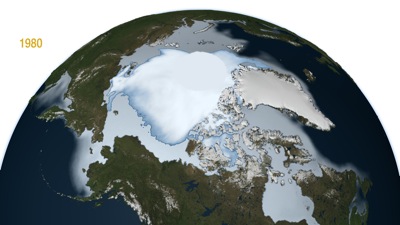 “Perennial” sea ice – all that which has survived at least one summer, including multi-year ice – is shrinking at a rate of 12.2 percent in extent and 13.5 percent in area, per decade. This, NASA says, demonstrates that the oldest ice is shrinking fastest. 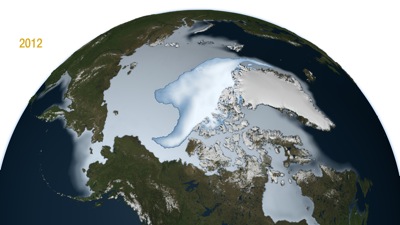 While there has been a slight recovery between the record multi-year ice minimum reached in 2008 (when it was only around 55 percent of the average extent during the late 1970s), NASA says 2012 recorded the second-lowest extent ever recorded. Even then, the last decade’s decline suggests an accelerating trend.

The raw data analysed by Comiso was collected by NASA’s Nimbus-7 satellite, which provided 32 years of passive microwave data, which he says is “the most robust and longest satellite dataset of Arctic sea ice extent data to date”.