The natives are getting restless

MWC 2012 Student protesters are gathering outside the Mobile World Congress in Barcelona, chanting and shouting, which would be more concerning if they weren't more or less outnumbered by the riot police.

A helicopter is circling overhead and a large group of students is gathered on the roundabout outside the congress site, but the local police are taking no chances and have deployed riot cops right across the entrance, forcing attendees to slip in the back way.

Neighbouring streets are blocked up with police vans, presumably ready to deploy more of the boys in blue should occasion demand it. 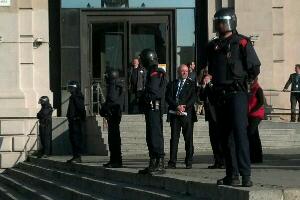 Locals had threatened transport strikes to coincide with the conference, pointing out that it was an ideal opportunity to tell the world about the economic struggle being played out in Spain, since the world has been too selfishly concerned with its own economic struggles to notice.

That's the stated motivation, but really it's a chance to embarrass the government in front of an international audience.

The transport strikes were called off at the very last moment, preventing serious embarrassment, and anyone who's played the board game Junta knows that the Student Protest card ultimately has no effect no matter the enthusiasm with which it's played. ®