MWC 2012 Everyone is making small base stations this year, some will even drop into the palm of a hand, but that's good as operators are desperate to get their wireless services safely ensconced in copper as quickly as possible.

Radio is very expensive, both in terms of power consumption and the cost of spectrum, so the less radio an operator's customers use, the better. At this year's Mobile World Congress, the focus is firmly on how to get customer calls out of the ether and onto the wires (or glass) as quickly as possible. Once into the physical space calls (data or vocal) can be cheaply routed around the place, and the radio spectrum they were occupying can be given to someone else.

The magic words here are "heterogeneous networks", or HetNets, where one network operator will deploy a macro network using their traditional towers, but then deploy tiny base stations within the covered area to which traffic can be offloaded as required. That requires really clever cells which can configure themselves to avoid interfering with the macro network, but can enable the network operator to switch them on only when required – and get all those calls onto the fixed infrastructure when it matters.

Putting all that intelligence into the cells could make them expensive, though the cost of processing continues dropping apace, so the challenge is getting backhaul organised and getting permission from the landowners to deploy all these Small Cells.

Backhaul these days can be an ethernet cable: Alcatel-Lucent even has Small Cells which can take Power over Ethernet (PoE), so connectivity is limited to plugging in a single wire. Others are using microwave backhaul, sometimes not even requiring line of sight and operating in the cheaply licensed 3.6GHz band, so those can simply be hooked up to a power source and bolted to the wall.

Alcatel-Lucent made a lot of noise with its Light Radio solution, which offloads the burdensome processing of radio signals into the cloud ("Cloud RAN" as the technique is known). But like all cloud-based services it requires huge amounts of bandwidth, more than copper can provide, so it should be limited to deployments where fiber-optic connections are available.

The telco has surmounted this problem, in its recently announced deployment with Telefonica, by moving the processing out of the cloud and into the radio, which (one might imagine) ceases to be "Light". We're told this is perfectly legitimate as "Light Radio" refers to a portfolio of products – including Alcatel-Lucent's admitedly impressive cube antenna – so it can claim to have a Light Radio customer even if that customer isn't using the Cloud RAN which gave the portfolio its name. 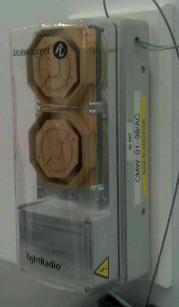 Two of the clever antennas are mounted
above the bulge, which wouldn't be
there if the radio really were "Light".

That's not to say that the cube antenna isn't an impressive bit of kit, and Alcatel-Lucent is so worried about the design being ripped off that the one bolted to the Mindspeed stand (Mindspeed provides the radio component) is unbolted every night for removal to the Alcatel-Lucent strong room to prevent industrial espionarge.

But it's not just Alcatel-Lucent that is squeezing cells down in size. Nokia Siemens Networks (NSN) has announced its own clustering technology which enables deployed Small Cells to mesh themselves together and share a single backhaul – but then pretend to the macro network that they are really a single base station of the traditional type. That means no additional complexity at the backend, but intelligence at the fringes.

Even the Wi-Fi players are getting in on the act, with Ruckus Wireless launching its own range of LTE base stations showing that the polyopoly of network infrastructure providers which has lasted so long isn't just under attack from China.

What this means for punters

This is mostly good news for users. Small Cells mean better coverage and lower power consumption (phones automatically dial back the power when a cell is nearby). The cells also broadcast at much lower power, which should keep the tin-foil-hat brigade happy as long as they don't realise it also means lots more use of microwave for local backhaul.

Getting backhaul to all those cells means routing connections over whatever infrastructure is available – there are even companies touting 3G Small Cells using 4G (LTE) for the backhaul – so that operators can make use of their 4G infrastructure while they wait for customers to get 4G kit.

In the next few years the number of operating base stations is going to explode, dropping into lampposts, hanging off cables and being bolted on to every wall which can be reached. That's going to present a huge challenge to services such as SiteFinder, which tries to provide information on every base station in the UK. But that service is already problematic, having been boycotted by Everything Everywhere, which doesn't want anyone to know where its base stations are.

Once there are are five times the number of base stations, no one will be able to keep track of them, which is OK as we'll all be too busy enjoying the connectivity to care. ®