Fujitsu claims its Eternus DX80 S2 array is the SPC-1 golden child, with the best price-performance ratios in the mid-range dual controller storage arrays sector. There is no formal mid-range definition though. 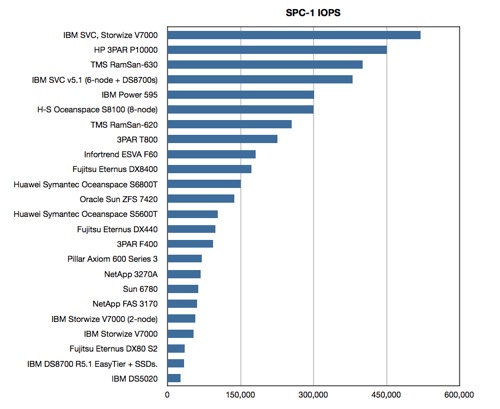 The DX80 S2 IOPS numbers are far from the commanding heights of SPC-1dom, as the IOPS chart shows: the fastest system is an IBM Storwize and SAN Volume Controller combination, which recorded 520,043.99 IOPS, almost 15 times faster than the DX80 S2 machine. This wide IOPS spread suggests that the single benchmark is too broad in scope to cover the available range of storage arrays; it is unrealistic to compare massive scale-out/scale-up designs with mainstream standard dual controller arrays such as the DX80. 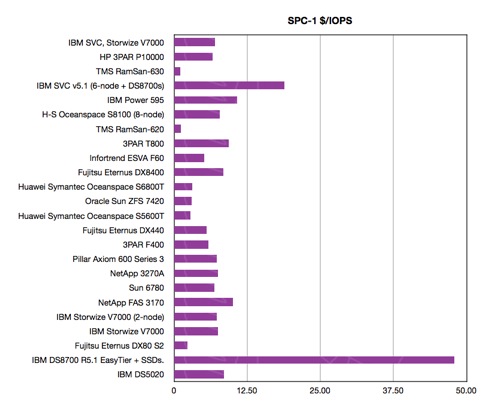 The SPC has no definition of mid-range arrays in its SPC-1 benchmark. Fujitsu's storage manager Sean Haffey said: "Mid-range storage is a moving feast. Today’s Eternus DX80 can support up to 360TB, which ran large enterprises not too many years ago. In smaller configurations, the DX80 is Entry: in large configs it’s at the low end of midrange. Furthermore, “entry”, “mid range” and “high end” are defined not merely by number of disks but by a combination of capacity, performance and functionality."

There are other DX systems: DX90, DX410, DX440 and DX8700, and these will have second generation technology in them. Haffey said: "We will benchmark other models in the range and, given that the S2 range is considerably more powerful than the S1, I expect to see considerably faster results." ®