iGamer Tap your finger to the beat. On the face of it, Beat Sneak Bandit's mechanic doesn't promise compulsive gaming. But developer Simogo squeezes more innovation from this single-finger iOS puzzler than many console and computer games manage by tying your hands in knots. 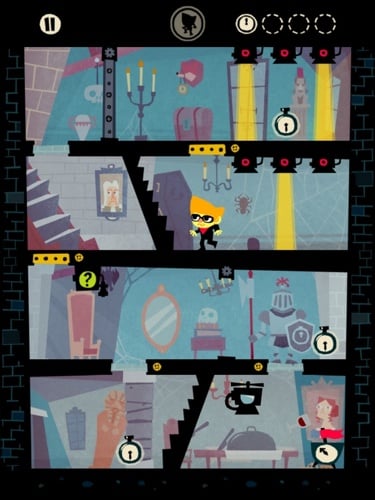 Drawn in a distinctive, angular 1960s animation style, Beat Sneak Bandit marries rhythm action with ingenious puzzling. You control the eponymous Bandit: a thief sent to catch a thief. Baron Von Clockface has stolen all the world's timepieces and you must infiltrate his mansion to retrieve them.

Each mansion room comprises a single-screen, four-storey puzzle in which staircases, security measures and traps must be navigated to collect as many small clocks as possible before reaching a main clock and thereby completing the level. 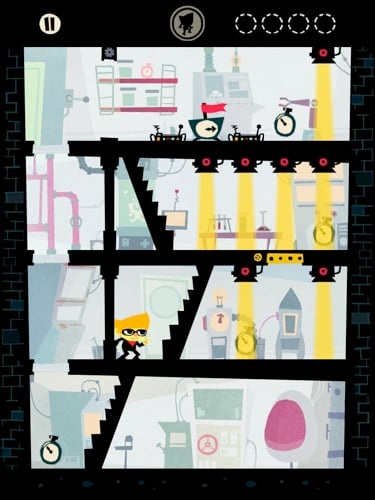 The catch is that every gameplay element functions according to a 4/4 beat. Security lights phase on and off, barriers and trapdoors open and close, security guards make their patrols – all to their own interpretation of the strict beat.

Bandit too is slave to the beat. Each tap moves him a single step in the direction faced, with walls and doors serving to turn him about. Tap the screen out of rhythm, however, and not only won't Bandit budge, but any small clocks on that storey will disappear. 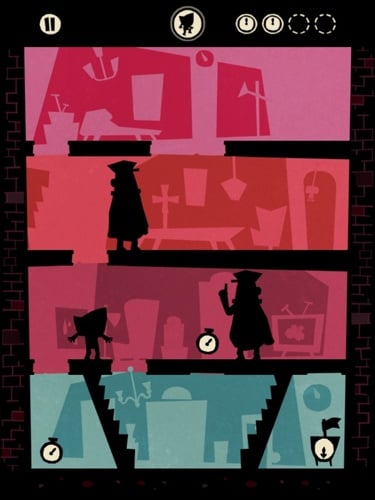 With main end-of-level clocks relatively easy to reach, it's these smaller timepieces which elevate the gameplay from mildly diverting to hellishly addictive. And they're not just a reward for the collectionists like Angry Birds' stars. They also unlock additional shadow levels, silhouetted rooms that have their own distinctive jazz piano soundtrack.