With the Linux-based Raspberry Pi now available for purchase, punters have started to push their own home-made chassis for the case-less computer. But one opportunist is touting this customised cigarette box.

Yes, you can bid on eBay for this craftily engineered Marlboro Light packet from one 'Hackneywhacko'. 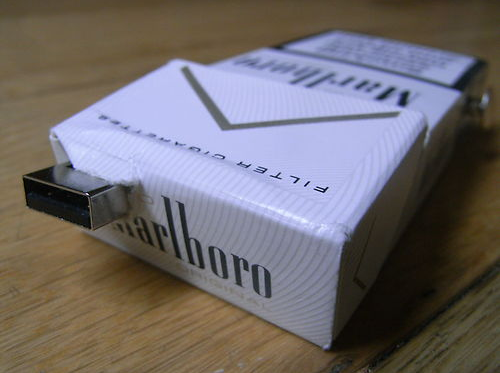 When I say craftily engineered, I mean, he's poked a hole in the top and described it as a "once-in-a-lifetime opportunity to own a collector's item alpha-prototype case".

The creator also highlighted the foil backed paper lining which "may or may not stop your weirdly small computer from bursting into flames".

Unlike the Raspberry Pi, the container was made in a British manufacturing facility, he says, before assuring potential buyers that it will make you look very cool.

Unfortunately, neither the cigarettes nor the computer are included with the case.

The 'recycled' custom case for Raspberry Pi Model B can be yours for a fiver, including P&P, although we suspect if you keep your eyes peeled on the floor next time you head to the shops, you'll probably find all the materials needed to make one yourself, absolutely free of charge.

Not that that would bother HackneyWhacko, who tells one inquiring punter that they can "can stick your dick in the mashed potato" for all he cares. ®

Thanks to Paul M and John C for the tip