Solyndra dream lives on in miniature

The idea that got Solyndra into so much trouble – that a tube-shaped solar cell could be more efficient than a traditional flat design – didn’t disappear when its highest-profile manufacturer collapsed. It remains a strong focus of research efforts.

There’s a good reason for this: if such designs can be fabricated at a competitive cost, you get a device that can collect the sun’s energy from many directions instead of just one.

The latest research into tube-shaped solar cells comes from Georgia Tech (abstract), where researchers have grown semiconducting nano-rods onto the surface of carbon fibres. The result is a fabrication technique that eliminates the high temperatures used in today’s fabs.

The Geogia Tech crew have grown bunched titanium dioxide (TiO2) nanorods on carbon fibres, so not only have they created a tubular structure for harvesting sunlight – they’ve done it on a flexible substrate. 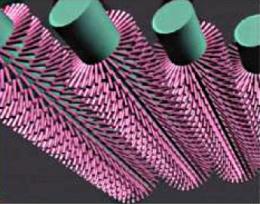 Next step, scale it up: Georgia Tech's

This, the researchers say, means that if they can get the fabrication technique out of the lab, their collectors could be woven into materials as flexible solar collectors – for example, solar clothing.

The team has demonstrated – and compared – the efficiency of two different techniques for depositing TiO2 onto the nanorods. The first approach was to use dissolved TI to grow the material as single-crystal nanorods; the second was to etch the rods into bunched arrays using hydrochloric acid.

The nanorods were then dye-sensitized to create solar collectors.