A team of Italian radio boffins – and one Swede – have one-upped their pioneering countryman Guglielmo Marconi by demonstrating a method of simultaneously transmitting multiple signals on the same frequency.

"This novel radio technique allows the implementation of, in principle, an infinite number of channels in a given, fixed bandwidth, even without using polarization, multiport or dense coding techniques," the team explains in a paper in the March issue of the New Journal of Physics.

If refined and commercialized, the technique developed by Fabrizio Tamburini and his team could radically increase the carrying capacity of today's cramped bandwith of radio, television, Wi-Fi, and wireless telecommunications.

Since Marconi first demonstrated wireless communications in 1895 – building on previous research undertaken by Nikola Tesla, Heinrich Hertz, Michael Faraday and others – transmissions have been encoded using various combinations of phase, frequency, and amplitude modulation. All well and good, but signals are limited to transmission within a single (or frequency-hopping) slice of bandwidth.

The breakthough achieved by Tamburini and his crew is based on adding orbital angular momentum to the signal-carrying mix, essentially twisting the directed signal in a way that offsets multiple signals in the same frequency. 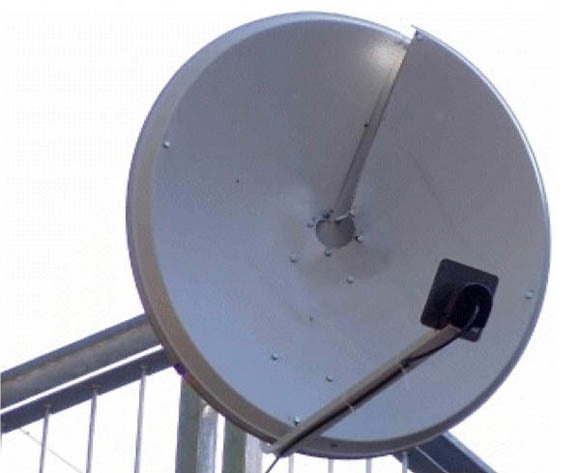 The team "spun" the signal in their successful demo by simply slicing one radius of a conventional parabolic antenna and raising one end of the slice above the other. Doing so gave the part of the transmitted signal from the elevated section of the antenna a small "head start" on the part from the lower segment.

The sent beam was then encoded with two separate signals timed to occupy opposite angles of the spin, and antennas were set up to receive each of them. Theoretically, much more discrete signal-slicing could fit more signals into the same transmitted frequency.

One beam, two signals received by antennas on either side of the signal's centerpoint

Team member Bo Thide of Swedish Institute of Space Physics first conceived the orbital angular momentum idea in a 2007 paper focussed on radio astronomy, but in which he wrote that the concept "paves the way for novel wireless communication concepts."

Last year, Tamburini, Thide, and their team demonstrated the multiple-signal technique by beaming two separate audio signals at 2.4GHz, then two television signals, 442 meters from the lighthouse of Venice's San Giorgio Island to the balcony of the Palazzo Ducale.

"It's exactly the same place that Galileo first demonstrated his telescope to the authorities in Venice, 400 years ago," Thide told BBC News.

As Thide noted, those authorities were skeptical. "They were not convinced at all; they could see the moons of Jupiter but they said, 'They must be inside the telescope, it can't possibly be like that.' To some extent we have felt the same [disbelief from the community], so we said, 'Let's do it, let's demonstrate it for the public'." ®