When it comes to preloaded apps Lenovo gets a pat on the back for including full versions of Documents to Go, Citrix Receiver, McAfee Security and the excellent FlexT9 keyboard, but a slap for the duplicate music and video players neither of which are much good and eBuddy which is now well off the pace as the best Android IM app. 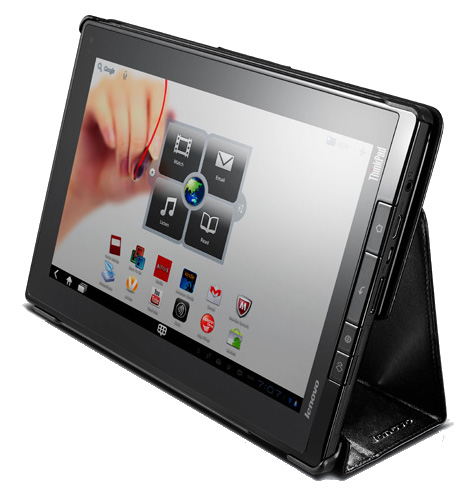 Lenovo’s light reworking of the Honeycomb UI includes a handy carousel app launcher and a bespoke widget with five zones for quick access to key apps. The last has a drawback though in that it takes up a huge amount of real estate over and above its visible footprint.

I’d usually show you some screen grabs at this point but I couldn’t get the ThinkPad to talk to the Android SDK on either my Linux or Windows machines – a first time failure for me – so would-be developers beware.

The battery is only rated at 3250mAh, so performance on this front is merely adequate. Loop a 720p video and you will run out of juice in under four hours. Perform less demanding day-to-day tasks but with the 3G and Wi-Fi radios on and you can make it to the seven hour mark but little further.

Heavy, black and hewn from the finest plastics known to man, the ThinkPad Tablet is exactly what you would expect a 'droid tablet carrying the TP moniker to be. The smart and business-like design is complemented by a solid range of physical connectors and the N-trig digitizing pen is sure to find fans, even if it’s not as talented as the Wacom stylus you get with the Samsung Galaxy Note. The only major grumbles are the abysmally quiet speaker and merely adequate battery life. ®