RSA 2012 Former British Prime Minister Anthony Charles Lynton Blair was RSA's pick to close out their annual security conference in San Francisco, and he took the opportunity to bash WikiLeaks as "disgraceful."

Blair took time out from his busy official role of bringing peace to the Middle East to pad his pockets speak for an unspecified sum at the conference's closing keynote, where he told his audience that he had very little knowledge of technology – claiming he never even owned a mobile phone until he left political office. This was an advantage, as it turned out, given the News International hacking scandal, he joked. 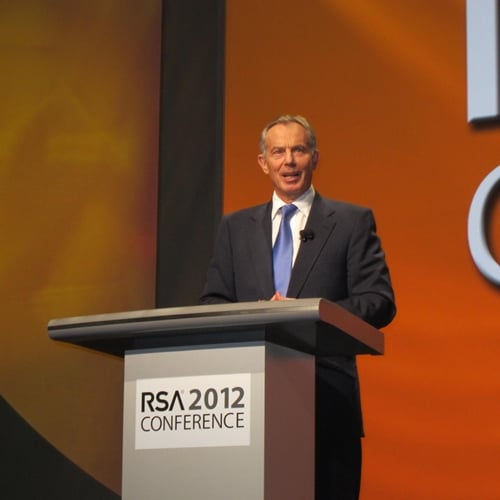 That said, he has some trenchant views on privacy and the activities of organizations such as WikiLeaks. Individuals need to have private communications, he said, but at the same time there are people who threaten our way of life that have to be stopped. Politicians, however, need privacy to function, and he denounced WikiLeaks for breaking that by publishing State Department cables.

"The thing with the WikiLeaks is that it was, in my view, a very bad and disgraceful thing to do," he said. "I was in Washington for meetings yesterday, and I have to be able to speak frankly. You can't have a situation where you're dealing with issues of extraordinary sensitivity and say there has to be complete openness."

Blair did say that, when it came to IT security legislation, politicians need to talk to people on the front lines to formulate laws that make sense and would work in the real world – a remark that bought warm applause from the audience.

He also admitted to getting social media wrong. When social media first emerged, he said that politicians saw it as something which would act as a brake on the conventional media. In fact, he said it was having a multiplier effect, and now it was up to the mainstream media to provide clear facts. Social media is also having a revolutionary effect in cutting the influence of government censorship, he said.

He also described explaining technology to his 11-year old son. While the younger generation was adopting technology faster than their parents, Blair asserted that you needed "the wisdom of the oldies" to put the technology itself in context.

Blair said that, despite massive changes in geopolitics, democracy was the future for the world, and cited the creation of the internet as an example of how free thinking is superior in driving innovation. Ultimately the economies of China and others will move towards a democratic model, in his opinion.

One can't help but wonder at RSA's recent choices for keynote closers. Past alumni have included Simon Singh, author of "The Code Book", and serial (but reformed) fraudster Frank Abagnale – people with knowledge of, and an interest in, security. But in the last few years RSA's choices have strayed from this path in favor of politicians giving stump speeches.

Last year Bill Clinton gave the closing address (from which press were barred – possibly to disguise the fact that Bubba gave almost exactly the same speech as he had at several other tech conferences that year), and this time we got another technology know-nothing.

While booking washed-up politicians might look good, one suspects delegates would rather have something on-topic. ®