Interview The phrase "Once you're lucky, twice you're good" should be applied to Allan "Al" Alcorn, the engineer behind Pong, the world's first successful computer arcade game which celebrates its 40th birthday this year.

It is Atari founder Nolan Bushnell, the buccaneering entrepreneur with a flashy grin, who attracts headlines for having invented Pong, a simple game of digital ping-pong that consisted of hitting a tiny white ball – actually a square – across the inky-blackness of a TV screen, between two "bats" controlled using circular paddles. But it was Alcorn who built Bushnell's idea.

And Alcorn didn't just build Pong once, he built it twice: first as the arcade game in 1972 and then as a home console. The latter system was in such demand that shoppers – predating Apple's fanbois by decades – waited hours in long, cold Christmas shopping lines just to get on the waiting list. Once it was in stores, the console was quickly copied by jealous rivals.

Pong proved that video games could be lucrative – if done right. Pong wasn't the first computer arcade game or even the first home games console. Bushnell already had Computer Space in arcades while at home there was Magnavox's Odyssey. What Pong brought to gamers was simplicity of play and presentation; it offered revolutionary features Odyssey lacked: sound, on-screen scoring and the ability to spin the ball to wrong-foot your opponent.

Pong was an early console pioneer. Nintendo's Wii, Sony's Playstation and Microsoft's Xbox are its heirs, with their multitude of titles from authors and studios who will all gather at this week's Game Developers' Conference in San Francisco, California. Spending on these systems and the associated ecosystems of titles and services in 2011 was estimated at $74bn last year and is expected to hit $112bn in three years' time.

Games development has changed from those Californian pioneering days of the early 1970s. Today, designing and building the system at least is an industrialised process, with components sourced and even assembled by established third-party suppliers using proven manufacturing processes. Games roll out from mega studios like movies – involving scripts, sets, designers, engineers and lots of marketing. 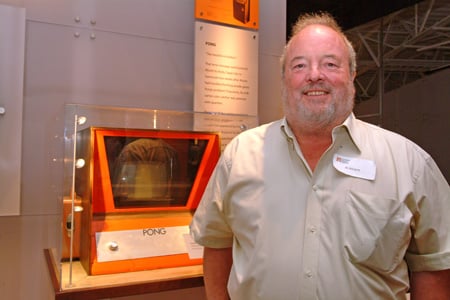 Alcorn with the first Pong in its original wooden box. Photo: Gavin Clarke

Back then, Alcorn didn't have access to these kinds of resources. Prefabricated off-the-shelf memory, processors and systems on a chip didn't really exist. If you were a start-up with vision in the early 1970s, you didn't just write the code or assemble the machine, you also built the basic components such as the chips from scratch as engineer Alcorn did. Designing the game play more often than not involved either copying the competition or jotting down some simple notes on a piece of paper.

When it came to bringing arcade Pong to the home, building the chips wasn't the biggest challenge facing Alcorn, a then recent graduate in electrical engineering and computer science from the University of California, Berkeley. In fact, it was building the game's rather simple exterior plastic casing that almost killed home Pong.

"The hardest part was the plastic case," Alcorn told The Reg during an interview at the Computer History Museum in Silicon Valley last year. "We had no idea how to make plastic tooling and consumer plastic products. I was so naive about it, it almost killed the project.

"I though the chip would be the hardest thing – how hard can the plastic case be? Well it turns out in those days it took four to six months to cut the metal that made the case and if there was a problem there was delay time. You lay a lot of money out and if it's wrong you can't fix it.

"All the other stuff on a chip is much easier to fix. And we [also] hired a contractor who was incompetent and a crook, and so I was three months into the project and I was like: 'Uh-oh, restart' so I had to scramble to get the thing out."

Home Pong couldn't have been more different to Alcorn's prototype arcade Pong machine. On the engineering side, Alcorn's speciality, it had 66 chips and a TV monitor that he had customised – plus a slot to take 25-cent coins for game play and two paddle controllers. Pong was stuffed into a rough, wooden box Alcorn made one weekend before and the prototype was dropped deep inside Silicon Valley at Andy Capp's Tavern in Sunnyvale, California.

Home Pong had its own digital chip and plugged into your existing home TV. And there would be no make-do-and-mend wooden casing for home Pong. Making matters worse for the home version was the pressure that came to bear on Alcorn as US retail giant Sears Roebuck & Co decided to feature Pong in its Christmas 1975 catalogue. Atari – the company formed by Bushnell to push Pong – was committed and there would be no backing out without serious loss of face and money.

Alcorn remembers: "They [Sears] usually shut the Christmas catalogue in March or April and they kept it open for us... the last time they did that was for a Marvin Glass slot car – the first slot car. They built 50,000 of them and the car could never get past the first turn and they had to buy all 50,000 back. Nolan and I are listening to this and thinking: 'If this happens to us, we're out of business. We're risking the whole business on this thing."

But Alcorn pulled it off and Sears sold nearly 150,000 home versions of Pong under the brand Tele-Games at $100 a pop during Christmas 1975. Such was the demand that people waited for up to two hours to simply to sign up to a waiting list for a home Pong. Home Pong is reputed to have become Sears' most successful product ever, earning Atari a Sears Quality Excellence Award.