When Atari entered the home-console market, it didn't just need something that gave consumers a TV tennis experience that beat the Odyssey, it had to also be hard to pirate. That meant concentrating almost all of arcade Pong's operations on a single, custom-made digital chip – one which also threw in the scoring and advanced sound missing in Odyssey.

"I wanted to do a custom chip that would make it hard for them to steal our stuff," Alcorn says. He worked with Atari colleagues Harold Lee and Bob Brown to deliver the magic. Alcorn reckons engineer Lee told him not to create a game that was too complex as it would defeat their ability to deliver.

"Harold Lee said: 'It [the chip] wouldn't work because your technology is evolving so fast. It takes a year to do a chip and that by the time it will be obsolete, but we can put your simplest game Pong on a chip'. And I though: 'Far out...' The three of us went of into a corner and put together a very crude but working chip. AMI did our prototype. We plugged it in and it worked." 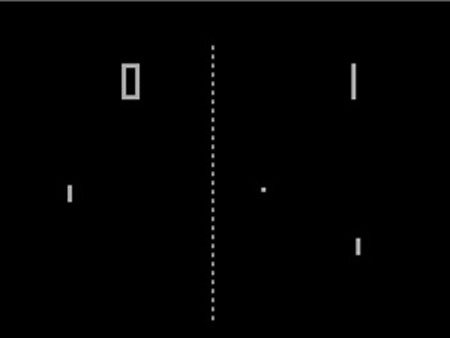 In space, no one can hear you Pong: On-screen scoring and ball spin were advanced for the time

You can see the schematic of the design here.

That's when Atari called Sears. "We had no business plan. It was like a dog chasing a car. What do you do if you catch it? So we called Sears and Roebuck – we figured they are a retailer, and that's why the first Pong is from Sears."

History will record that Alcorn's chip actually failed to thwart the pirates, and home Pong was ripped off just as badly as arcade Pong. Home imitators sprang up, with – among others – Coleco's Telstar in 1976 and Nintendo's Color TV Game 6 in 1977, while General Instruments built and licensed a chip for manufacturers of similar ball-and-paddle games. It was probably a tribute to the simple brilliance of Pong that others wanted in on the action.

Today's gaming industry includes huge Japanese and US corporations and powerful design studios and labels pumping out installment after installment of the same game. Comparing the '70s gaming pioneers of the Wild West with today's giants, who will be gathering in San Francisco this week, Alcorn reckons he had it easier – even though he had to build everything from chip to casing. Back in the 1970s there was freedom to experiment and fail: Atari, for example, had flopped with Video Music before it hit paydirt with the successful 2600 VCS, which cemented the company name and allowed users to load different games into the console. This plugged your stereo into your TV to create a light show in tune with the music or, as Alcorn describes it, create "a hippie light show."

"We sold like zero [copies of Video Music]. It was no big deal, nobody was fired. If you can't make mistakes and fail you better not try to be too creative." Alcorn added: "It's much harder today; it's frightening as hell today. There's so much time and money in a game that you can't veer from it. If you're one guy: there it is, take it or leave it."

Is there a Pong equivalent today? Alcorn gives credit to Nintendo's Wii, the first of the wire-free and sensor-based controllers – which Microsoft has taken a step further with the Kinect. He says: "They [Nintendo] had the courage to do something new in a new class of games. I got disappointed with the Xbox and PlayStation in that you have basically have three or four types of games: there's the shooting game or the jumping game. And that's getting kind of boring. Things like Tetris appeal to me because that's only a game that exists in that medium."

What of the future of gaming? 3D is the next evolutionary step, Alcorn reckons, but the man himself isn't doing much to hasten 3D's arrival. Instead, he's been working in start-ups while in his spare time Alcorn only plays World of Warcraft, where he sees Apple co-founder and fellow Silicon-Valley chip-fiddler Steve Woz.

Compared to rich and complex titles such as World of Warcraft and Medal of Honor, or even compared to games as simple as Pac Man and Space Invaders for the Atari 2600 VCS, the game of Pong couldn't have been much simpler from the perspective of technology, design or game play. Yet all these titles owe their existence to Pong, which – like the Atari brand – continues to command a retro fascination.

As game-changers go, Pong was an unassuming contender. Perhaps that was its secret. "I'm just delighted people still admire something I did so long ago," Alcorn tell us. "Maybe it's the same thing antique cars have; it's a simplicity of the past.

"Imagine if somebody came out with a game that simple now. Even a simple game on the iPhone like Angry Birds, that's a lot of graphics. I mean on Pong, Nolan said: 'Make the ball round,' and I'm like: 'Screw you, I'm not making it round!'" ®