Oof! Chipzilla unzips double bulge and gets its stuff out

Chip off the new block 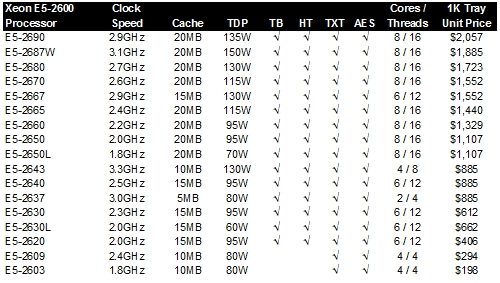 All of the processors listed above support AES-NI encryption/decryption on the chip, as well as Virtualization Technology (VT) circuit-based assistance for hypervisors and Trusted Execution Technology (TXT) security.

The last two parts, the E5-2609 and E5-2603, do not support Turbo Boost (TB) overclocking or HyperThreading (HT), Intel's implementation of simultaneous multithreading. But all of the remaining models in the Xeon E5-2600 line do support HyperThreading, which carves each core into two virtual threads, and Turbo Boost, which adds anywhere from 200MHz to 900MHz to the clock speed of cores on the chip, depending on the model and the number of cores you have turned on when you hit the nitro. On eight-core chips, if you have all eight cores running, you get something between 200MHz and 500MHz, and shutting all the cores down except one will get you between a 500MHz and a 900MHz speed bump for that one core.

A platform, not just a chip

The prior generation of Xeon 5600 platforms – by which is meant the combination of processors and chipsets – was called "Tylersburg", perhaps after a dinky town in the middle of the Allegheny National Forest, and maybe the new "Romley" platform is named after a Colorado ghost town once known for mining.

Wherever it gets its name, Romley is the new two-socket server platform, and this is what it looks like: 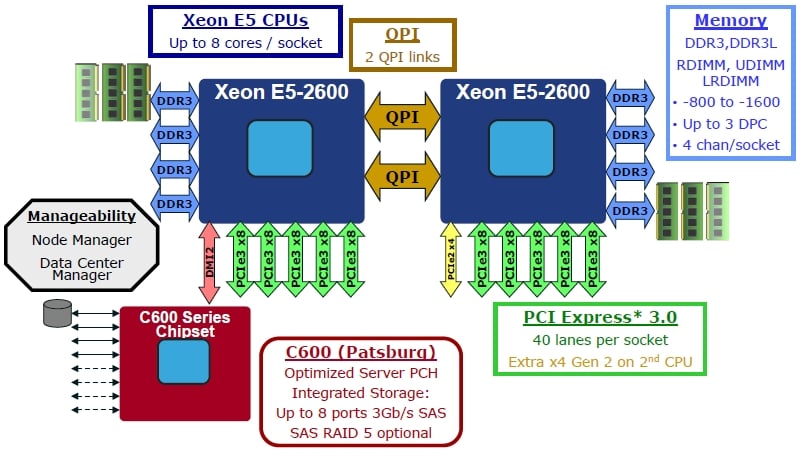 Block diagram of the Romley server platform (click to enlarge)

Technically, this is the Romley-EP platform, and El Reg expects Intel to eventually offer a low-cost, two-socket server based on as-yet-unannounced "Sandy Bridge-EN" Xeon E5-2400 processors, as well as a four-socket Romley platform based on a forthcoming Xeon E5 variant. But Intel's top brass in the Data Center and Connected Systems Group are not talking about these other platforms on Tuesday, and would not confirm any of these details.

The Romley-EP platform puts two sockets on a system board and the Patsburg C600 chipset. Patsburg is basically a "Cougar Point" C200 chipset on steroids, and is technically a Platform Controller Hub (PCH) that has been optimized for server workloads. (The Intel 6 and C200 chipsets are used for PCs, workstations, and entry servers.) This PCH is basically the system clock for the motherboard, plus whatever southbridge functions that have not been absorbed onto the chip itself. 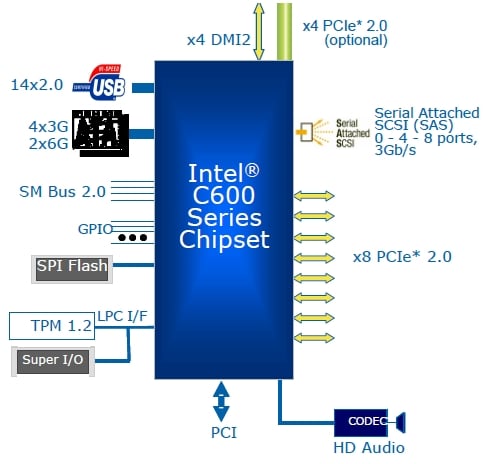 The Romley platform brings it all together, with two QPI links between the processors that allow close-to-ideal symmetric multiprocessing scaling on most workloads. The PCI Express 3.0 controllers on each Xeon E5-2600 socket have 40 lanes of bandwidth per socket, which can give you five x8 slots per socket. Then there's I/O bandwidth left over to give you a PCI-Express 2.0 x4 slot on one socket and a DMI2 slot on the other one.

The C600 chipset is a modified version of the C200 chipset with more storage and I/O options suited for enterprise systems. The chipset links to the Xeon E5-2600 processors through the DMI2 slot and can also make use of that PCI-Express 2.0 x4 slot as well.

El Reg will be digging into the details on the new Xeon E5-2600 processors in terms of performance and pricing, as well as looking at how server makers deploy these chips and chipsets in their machines. Stay tuned. ®