Updated In a predictable backlash against the sweep that has netted suspected LulzSec members in America and Europe, Anonymous has defaced some web pages of the security firm Panda Security.

As previously reported by The Register, the arrests turned on the assistance of Hector Xavier Monsegur, known in LulzSec circles as Sabu. Anonymous has added another name-to-blame to the list, accusing Panda Security of helping the FBI by infiltrating chatrooms and message boards.

The promo page, Panda Security’s “Cybercrime Files”, has been defaced with a long statement denouncing Sabu, and accusing the security company of “working with Law Enforcement to lurk and snitch on anonymous activists”. 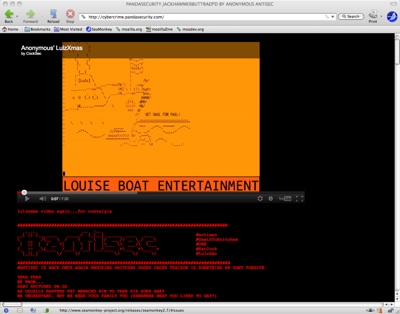 The attackers list a total of 36 of the company’s pages which it says have been defaced, some of which have either been restored or were listed by mistake.

“Anonymous existed before LulzSec and will continue existing,” the post also states.

More seriously, the defaced page – still available at the time of writing – also shows email addresses and passwords apparently obtained in the attack.

The Register also notes that following December’s attack on Stratfor, at least some Anonymous members were suspicious of Sabu, calling him a possible “agent provocateur” in a statement posted on Pastebin.

Update: Panda Security released a statement on its Facebook page about the hack on Wednesday:

On March 6th the hacking group LulzSec, part of Anonymous, obtained access to a Panda Security webserver hosted outside of the Panda Security internal network... The attack did not breach Panda Security’s internal network and neither source code, update servers nor customer data was accessed. We continue investigating the cause of the intrusion and will provide more details as soon as they become available.

This and wearables fortified with machine learning to serve you, human
Personal Tech6 Oct 2022 | 4

I think we can handle one little Russia. We sent two units, they're bringing any attempts down now
Security6 Oct 2022 | 10