Get out your tinfoil hats

Sol is having a bit of fusion indigestion again and has belched forth one of the largest solar flares to come hurtling towards Earth in the past five years, according to NASA.

NASA said in a statement that the solar flare on March 6 at 7 PM Eastern time weighed in at X5.4 on the solar flare scale. The flare came from an area known as Active Region 1429, a belchy spot in the solar surface rolled into view on March 2.

Solar flares are classified based on the energy of X-rays (in the 100 to 800 picometer range) smacking the Earth as measured in watts per square meter. A fairly strong M-class flare has 10-5 to 10-4 watts per meter of peak flux, while the top-end X-class flares generate more than 10-4 of peak flux. The scale is linear within each class, so an X5 flare is five times as strong as an X1 flare. The X-ray measurements are taken by the Geostationary Operational Environmental Satellite system from orbit, which is operated by the US National Weather Service.

That X5.4 rating on the March 6 flare makes it the second most powerful flare since the Sun hit the lull in its 11-year cycle back in early 2007. Solar flare activity is expected to rise through 2013, provided the world (and perhaps the Sun) doesn't end on December 21, 2012 as the Maya – how convenient for them to be extinct, eh? – predicted. 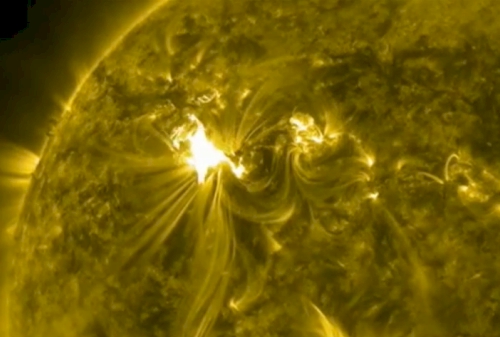 X5.4 marks the spot – everybody duck!

By the way, the Maya are not extinct, they just abandoned their cities before the Spanish got there and melded into the jungle, and the 5,125-year Mayan Long Count calendar just hits reset on December 21, 2012. It's a clock, not a detonator. So we do, in fact, have to learn to get along.

A little more than an hour after the first belch on March 6, a flare rated at X1.3 erupted from the same area of the Sun's surface. The flares were pointing Earthside and triggered temporary radio blackouts, interfering with radio navigation and shortwave radio, according to NASA, and also coincided with two "significant" coronal mass ejections. A flare from March 4 is dumping electrically charged particles in the magnetic fields of Earth right now, and depending on how the flare is oriented this time, we could get whacked again, and a bit stronger.

NOAA's Space Weather Prediction Center put out its own statement, with M-class burping expected in the AR1429 region today, with the Earth's geomagnetic field to be "unsettled to active" in the next 24 hours because of all the solar activity. Everything should quiet down by Friday, and if you live in the Northern Hemisphere, might be a good time for some romantic aurora borealis viewing.

These flares and related coronal mass ejections are nowhere near as powerful as the March 9, 1989 flare, which energized a severe magnetic storm in Canada and knocked out the power grid. (The GOES system was not in use then for measuring geomagnetic storms.) And the mother of all modern geomagnetic storms, on September 1 and 2, 1859, was hot enough to shock telegraph operators directly and the aurora reached down into the tropics. ®