Turbulence-mapping will light up night sky

NASA is planning to light up the night sky in the next month, sending five rockets at the same time to the edge of space to find out more about the jet stream winds that circle the planet.

The space agency is waiting for a clear night between 14 March and 4 April to blast off the five sounding rockets, known as the Anomalous Transport Rocket Experiment (ATREX), all within five minutes. 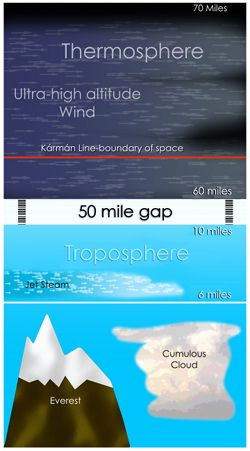 Location of the two known jet streams in the atmosphere

The 35 to 40 feet (10.5 to 12m) boosters will be exploring the high-altitude jet stream to give boffins more information on the electromagnetic regions of space that can damage man-made satellites and disrupt communication systems.

The winds high up in the sky – just below a typical satellite's orbit but above where passenger jets fly – rush through the atmosphere at speeds of up to 300 miles an hour (483kmph). Atmospheric disturbances in the jet streams above one part of the Earth can be transported across the world in just a day or two.

"This area shows winds much larger than expected," Miguel Larsen, a space scientist at Clemson University who is working with the rockets, said in a canned statement.

"We don't yet know what we're going to see, but there is definitely something unusual going on. ATREX will help us understand the big question about what is driving these fast winds."

Figuring out where the wind comes from requires the boffins to look at the way the winds move and the kind of turbulence they show.

The five sounding rockets will blast off from NASA's Wallops Flight Facility in Virginia, trailing a chemical tracer of trimethyl aluminium, which will leave milky white clouds behind, allowing scientists on the ground to "see" the winds and track them with cameras. Two of the rockets will also have instruments on board that can measure pressure and temperature while they're up there. 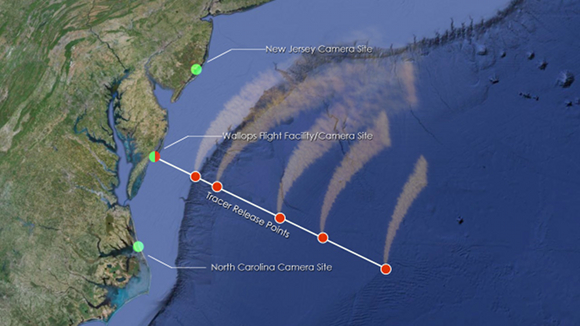 Where the ATREX rockets will deploy the chemical tracer. Credit: Larsen

The cloud trails from the rocket will last for 20 minutes and should be visible to people along the east coast of the US from South Carolina to New Jersey.

"People have launched single rockets before," Larsen said. "But the key here is that we're extending the range of measurements to many hundreds of miles. The furthest rocket will make it half way to Bermuda."

NASA wants to launch five of the sounding rockets because the boffins want to find out if the turbulence is 3D or 2D in order to figure out where the winds might be coming from.

If the turbulence is three-dimensional, it would suggest that the winds are like gusting winds on Earth, telling the scientists that the winds could be driven by heat in the atmosphere, which varies during the course of a day. However, other man-made tracers, such as the exhaust from space shuttles, hasn't broken up and dissipated the way it should have down if this kind of turbulence is up there.

The turbulence could also be two-dimensional, which would support the theory that the wind is a directed, jet stream flow, strongly enhanced by the combination of electrical currents and the rate of the Earth's rotation. ®