GRAIL lunar orbiters get down to business

First data coming in from Ebb and Flow

NASA reports that its twin Gravity Recovery And Interior Laboratory (GRAIL) spacecraft in orbit around the Moon have begun sending back data.

The mission's two craft, named Ebb and Flow after a public competition, will spend the next three months in orbit around our only natural satellite, measuring its gravitational field. The craft successfully reached orbit on New Year's Eve and Day, and began sending back mission data this Tuesday evening.

"The initiation of science data collection is a time when the team lets out a collective sigh of relief because we are finally doing what we came to do," said principal investigator for the GRAIL mission Maria Zuber in a statement. "But it is also a time where we have to put the coffee pot on, roll up our sleeves and get to work." 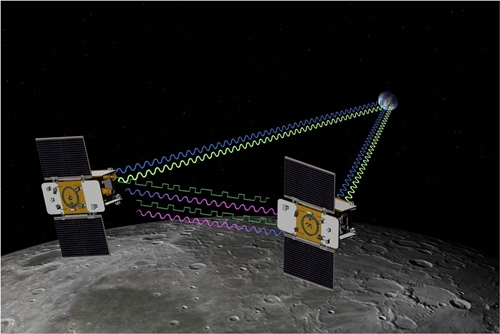 The GRAIL craft achieve a milestone in orbital precision

The two probes are circling the Moon in tightly controlled orbits, and will constantly measure the distance between themselves to detect the gravitational influence of the lunar landscape on their orbital paths. Over the next three months they will map the gravitational features of the Moon three times and send the data back to earth.

"We are in a near-polar, near-circular orbit with an average altitude of about 34 miles (55km) right now," said David Lehman, GRAIL project manager from NASA's Jet Propulsion Laboratory (JPL) in Pasadena, California. "During the science phase, our spacecraft will orbit the moon as high as 31 miles (51km) and as low as 10 miles (16km). They will get as close to each other as 40 miles (65km) and as far apart as 140 miles (225km)."

NASA says it's the first time this kind of orbital precision has been tried, and that the level of details required is stunning. Engineers had to take into account the pressure effects of sunlight – both directly and reflected off the Moon – along with heat radiation from the Moon and from the spacecraft itself, minute amounts of gas escaping from the spacecraft, and the expansion and contraction of various parts of the spacecraft in response to heating and cooling.

The craft also contain cameras dubbed MoonKam (Moon Knowledge Acquired by Middle school students), which last month sent back images of the far side of the Moon. Carrying cameras specifically so schoolchildren can learn about space is another first for NASA, and some future missions will also carry them. ®