Interview I'm not defending greedy bastard corporations, says author Rob Levine, and you don't have to either. But we need something better than a broken digital economy.

Published last year, Levine's book Free Ride seemed acutely well-timed. Online discussions about digital copyright are now so cliched, an artificially intelligent robot could provide 95 per cent of arguments. The book thrust a spike through the idea that noble internet "innovators" were being thwarted by evil copyright holders. The world isn't so childishly simple, he argued. The world needs both.

But since then we've had the SOPA protests given global media coverage by the Wikipedia blackout, and the web lobby looks triumphant. I caught up with Rob this week to ask him what he thought has changed.

So Rob, what has the Stop Online Piracy Act (SOPA) changed?

"SOPA has changed a lot. SOPA was a massive, massive miscalculation by the entertainment business that permanently changed the narrative. The main narrative has been 'greedy record companies versus internet pioneers'. I think that's bullshit, I think it's one group of people with rights versus another group of people with rights - and it's one group of greedy companies versus another group of greedy companies.

"I thought SOPA was problematic - it was hard to figure out what it would actually do. I'm kidding a little here, but I don't know how a government should ever pass a 175-page bill that a reasonably intelligent person can't understand."

"Hey, I would probably favour a higher tax rate than you would, but I wouldn't favour a tax rate that's incomprehensible."

"SOPA wasn't as bad as some people made it out to be, but because it was so convoluted, it became very hard to defend because so much of it was confusing."

"Well I think there was so much anger against it that now there's anger against everything. For example, if you read ACTA, it's not that big a deal. But ACTA is presented as the Treaty of SOPA. If you read ACTA there is nothing in it that's anything like what people said about SOPA. It's not that big a deal and I'm not sure it will help the entertainment industry as much as the entertainment industry likes to think."

Well, there's nothing in it for them, really

"I'm not sure. I don't understand the treaty world but I do know when you see massive demonstrations about something that's relatively not a big deal - it means the world has changed.

"There was this great video on YouTube of how if you share a chicken recipe you could be criminally liable for the chicken. 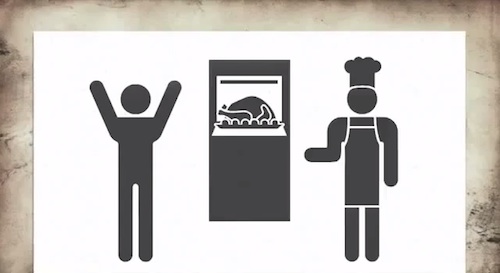 "What's it mean to be 'criminally liable for a chicken'? And recipes, obviously, aren't covered by copyright. It's a lot of overstatement.

"A lot of people said: 'We turned GoDaddy. GoDaddy's not backing the bill.' But they didn't convince [domain registrar] GoDaddy that SOPA was a bad idea, or that GoDaddy was wrong - they let it be known that GoDaddy's business future was bleak unless they made a specific public statement, and so GoDaddy made that public statement. GoDaddy thought: 'Let's put out something that appeases the mob with torches and pitchforks.' That's a certain kind of democracy - but it's also fear of the mob.

"The same thing's happening in Canada with a bill that's the Canadian version of the DMCA. There's a storm of anger, and that anger's not going away. I don't think that anger has much to do with the entertainment business - a lot of that is about the time we're in. I think that anger is partly because of Goldman Sachs, and partly because of the Euro crisis, and partly for all these other reasons. If you look at countries where the economy's in bad shape they're sick of being pushed around by the French and the Germans.

Right now we have copyright that lasts almost forever, covers too much, and it's not effective

"I'm defending commerce: the idea that there's a market for culture is something worth defending. I think there should be competition. If record companies are bad and inefficient they should face competition from companies that are efficient. But that's not what's happening."

Do you think the SOPA protest will make a lasting difference, though? I wrote at the time [and so did Matt Asay] that you need intellectual property. All those copyright industries not going to go away. It's going to come back every year, because so far the antis have never seen an enforcement measure they can live with. So I asked: "Do you really want to do this every year - this weird annual ritual? Is that all there is on your political horizon, saying 'no'?"

"SOPA was a bigger deal. SOPA poked the bear. The entertainment companies were very successful at lobbying and they were spending a relatively large amount of money on it. Google is now spending a lot of money on lobbying, and now money is pouring into Washington from all kinds of technology businesses. That's going to change things.

"The entertainment lobbyists' outside game wasn't good, but their inside game was great. I didn't think they had an outside game at all, and weren't prepared to explain what they were doing.

"Google is ramping up its game. If you're outspent in Washington, and out-propaganda'd online, you're in a much worse position than you were before.

"Now they're saying: 'We're going to reach a consensus position on this with Google.' Well, Google is not a company that's very interested in consensus. It's a much more ideological company."

I don't see the same thing in the UK, to be honest. I see two things. One is that Hargreaves and the IPO have united parts of the copyright industries against a common enemy, and these parts are far more used to fighting each other. That's something you don't see very often. They view themselves as fairly successful sectors that are inexplicably under attack from their own government, and their own bureaucracy.

"That's interesting. One of the things the technology industry has has done well is present a united front. In Canada, there's a lot of bad blood between the writers and the publishers, for example. Or between artists and labels. You've got artists talking down their labels - sometimes with good reason. But if one company is paying you less than you deserve - but the other company wants to pay you nothing, you might want to settle some of your differences in private, and others in public."